Understanding the Potential Uses for CBD In Dentistry 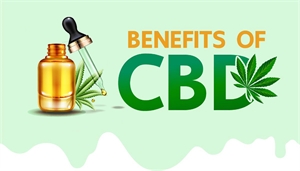 Among the latest inventions or innovations that are going out in the market today, one thing that struck most of the world is the unlimited potential of CBD or Cannabidiol to any field of work.

Among the latest inventions or innovations that are going out in the market today, one thing that struck most of the world is the unlimited potential of CBD or Cannabidiol to any field of work.
Plenty of research shows that CBD can have a lot of benefits in terms of treating several symptoms/diseases that are common today especially pain relief. But what is CBD? We keep talking about CBD and its benefits. Cannabinoids are one of the diverse groups of chemical compounds that act on cannabinoid receptors in cells that alter the release of neurotransmitters in the brain. There are at least 113 different types of cannabinoids isolated from marijuana, showing different effects.

Specifically, CBD essential oils can support the following diseases: Click for source about the topic "22 Benefits of CBD Oil".

For starters, CBD is a short term used for Cannabidiol. Cannabidiol is a chemical that can be extracted from the plant called Cannabis sativa.

It is just one of the many cannabinoids that can be taken from the plant. And yes, Cannabis Sativa is the Marijuana or hemp plant that is illegal in most countries.
However, CBD is approved in countries where their research is more extensive. In fact, there is an FDA (Food and Drug Authorities) approved drug called Epidiolex.
Epidiolex is a CBD-based product that is used to treat seizures that are associated with Lennox-Gastaut syndrome or Dravet syndrome in patients with ages 2years and older.
FDA approved this kind of drug because the truth is told, CBD doesn’t make someone high. Yes.
Since CBD is not psychoactive like its cousin THC (Tetrahydrocannabinol) which distorts a person's mind, or what we commonly say as “getting high”, it gained more popularity than it was expected. CBD contains none to 0.3% of THC.
There is even a study that claims CBD can eliminate the effect of THC. Although there is an exemption to this feat. According to Dr. Chin, a CBD expert, only about 5% of people will react to CBD.
Dr. Chin said that usually, this 5% are the people who are having side effects from Advil or Tylenol.
She also stated that we don’t know how our body can react to certain supplements, so it is best to seek people who are experts in this field in order to examine your body and determine your body’s compatibility with CBD.
Doctors can give you the right CBD product and give you the right dosage for the drug. There are a couple of benefits to using CBD. One benefit of using CBD is its ability to reduce anxiety and depression.
According to WHO (World Health Organization), anxiety can be seen in almost 20% of the world’s population. Anxiety and depression are the most common mental health disorders that can have harmful impacts on health and well-being.
Normally, the treatment for this is pharmaceutical drugs which can bring a number of side effects that include drowsiness, insomnia, agitation, headache, or worse, sexual dysfunction.
CBD oil has proven itself to be a treatment for anxiety and depression, giving hope to people who suffer this kind of mental health disorder via a natural approach.
Another use of CBD is that it is mostly used for relieving pains. Did you know that CBD has been used way back before since 2900BC? Yes, historians have shown that in earlier years, people have already been using CBD to treat chronic pains using Marijuana and its extracts.
Although it's not that specific like it is today. Recently, scientists have found certain components of Marijuana are responsible for this feat. The body creates endocannabinoids, which are the neurotransmitters that take care of binding the cannabinoid system into your nervous system.
In a human study, they have found out that the combination of CBD and THC is effective in relieving any pain related to arthritis and multiple sclerosis.
It has already been in a lot of research, studies, and articles that claim that CBD can help in inflammation, chronic pains, and anxiety.
Since there has been a lot of affirmation that CBD has a powerful anti-inflammatory effect, this means that it may be said that it has the potential in treating the inflammation caused by oral surgery. Surgeries such as dental implants.
In post-treatment pain management, since CBD has strong analgesic effects, it can be assumed that CBD may be a good alternative to other pharmaceutical drugs in terms of managing pain caused by surgeries like tooth extraction or implants.
Although the common and traditional pharmaceuticals, namely opiates, are effective in controlling pain, they often cause side effects such as nausea and vomiting. CBD may be a natural alternative that doesn’t involve any side effects.
Though there have been a lot of speculations on whether it is effective or not, according to research results, it can be said that CBD brings a lot of potential to the field of dentistry.
Due to its composition and natural properties to negate serious side effects, it won’t be far to see that CBD usage may dramatically increase in no time.