Mercury Is This Heavy Metal and A Poison. Should We Still Be Using Mercury Fillings 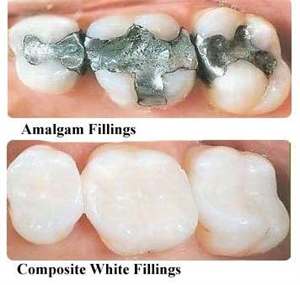 Do you still have Mercury fillings in your teeth? Heavy metals–like mercury are toxic to our bodies. High levels of mercury can contribute to chronic fatigue syndrome, muscle pain, twitches, insomnia and anxiety to name a few.

Do you still have Mercury fillings in your teeth? Heavy metals–like mercury are toxic to our bodies. High levels of mercury can contribute to chronic fatigue syndrome, muscle pain, twitches, insomnia and anxiety to name a few. In the past 100 years Mercury levels have dramatically increased in the environment. Industrialization was a major contributing factor.

Mercury is lipophilic, which means that it concentrates in fatty tissues. As the brain is mostly fatty tissue Mercury seems to concentrate there. Inorganic mercury from dental fillings (amalgams) can affect and does affect the body once this mercury is in your body; it is primarily distributed in the kidneys and brain. Although mercury can be dispelled from the body, it has an affinity for sulfur-containing molecules and can bind to them causing a build up in the fatty tissue.

Mercury from silver dental fillings (amalgam) is constantly absorbed into your body from chewing, brushing, grinding, and even slows corrosion. There is a large question about these silver fillings causing toxic levels of mercury in our bodies. Mercury has a long half life and sticks around for up to 18 years after the fillings have been removed from the body. The American Dental Association states that the use of amalgam fillings is safe.However, the Environmental Protection Agency (EPA) believes old mercury fillings (removed from the body) are toxic waste and therefore has to be disposed of in such a way as not to contaminate landfills. So mercury fillings in our mouths are still considered a normal practice, but they cannot be thrown in the garbage due to safety concerns. That doesn't seem to make sense.

Research forces us to question the safety of certain types of fillings. Silver filling can be removed safely and effectively if done by a trained dentist. Have you asked your doctor about your mercury fillings and if so, what was their response?

(i) Lindh U. Removal of dental amalgam and other metal alloys supported by antioxidant therapy alleviates symptoms and improves quality of life in patients with amalgam-associated all health. Neuroendocrinology Letters 2002; 23(5/6):459-482.