6 REASONS HEALTHCARE IS SO EXPENSIVE IN THE U.S. 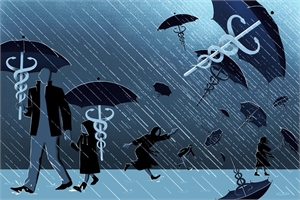 Healthcare in the U.S. costs about twice as much as it does in any other developed country. If the $3 trillion U.S. healthcare sector were ranked as a country, it would be the world’s fifth largest economy according to “Consumer Reports.” The cost of this huge financial burden to every household because of lost wages, higher premiums and taxes plus additional out-of-pocket expensesis more than $8,000.Even with all this money being spent on healthcare, the World Health Organization ranked the U.S. thirty-seventh in healthcare systems, and The Commonwealth Fund placed the U.S. last among the top 11 industrialized countries in overall healthcare. Why is the U.S. paying so much more for care and not appearing at the top of the rankings? Here’s a look at six key reasons the U.S. is failing to provide adequate healthcare at reasonable prices.

1. ADMINISTRATIVE COSTS
The number one reason our healthcare costs are so high, says Harvard economist David Cutler, is that “the administrative costs of running our healthcare system are astronomical. About one quarter of healthcare cost is associated with administration, which is far higher than in any other country.”One example Cutler brought up in a discussion on this topic with National Public Radio was the 1,300 billing clerks at Duke University Hospital, which has only 900 beds. Those billing specialists are needed to determine how to bill to meet the varying requirements of multiple insurers. Canada and other countries that have a single-payer system don’t require this level of staffing to administer healthcare.

2. DRUG COSTS
Another major difference in health costs between the U.S. and every other developed nation is the cost of drugs. The public definitely believes drug costs are unreasonable; now politicians are starting to believe that too. In most countries the government negotiates drug prices with the drug makers, but when Congress created Medicare Part D, it specifically denied Medicare the right to use its power to negotiate drug prices. The Veteran’s Administration and Medicaid, which can negotiate drug prices, pay the lowest drug prices. The Congressional Budget Office has found that just by giving the low-income beneficiaries of Medicare Part D the same discount Medicaid recipients get, the federal government would save $116 billion over 10 years. Think of what the savings might be if all Medicare recipients could benefit from Medicaid-negotiated drug prices!

3. DEFENSIVE MEDICINE
Yet another big driver of the higher U.S. health insurance bill is the practice of defensive medicine. Doctors are afraid that they will get sued, so they order multiple tests even when they are certain they know what the diagnosis is. A Gallup survey estimated that $650 billion annually could be attributed to defensive medicine. Everyone pays the bill on this with higher insurance premiums, co-pays and out-of-pocket costs, as well as taxes that go toward paying for governmental healthcare programs.

4. EXPENSIVE MIX OF TREATMENTS
U.S. medical practitioners also tend to use a more expensive mix of treatments. When compared with other developed countries, for example, the U.S. uses three times as many mammograms, two-and-a-half times the number of MRIs and 31% more Caesarean sections. This results in more being spent on technology in more locations. Another key part of the mix is that more people in the U.S. are treated by specialists, whose fees are higher than primary-care doctors, when the same types of treatments are done at the primary-care level in other countries. Specialists command higher pay, which drives the costs up in the U.S. for everyone.

5. WAGES AND WORK RULES
Wages and staffing drive costs up in healthcare. Specialists are commanding high reimbursements and the overutilization of specialists through the current process of referral decision-making drives health costs even higher. The National Commission on Physician Payment Reform was the first step in fixing the problem; based on its 2013 report, the commission adopted 12 recommendations for changes to get control over physician pay. Now it is working with Congress to find a way to implement some of these recommendations.

6. BRANDING
“There is no such thing as a legitimate price for anything in healthcare,” says George Halvorson, the former chairman of health maintenance organization Kaiser Permanente. “Prices are made up depending on who the payer is.”Providers who can demand the highest prices are the ones that create a brand everyone wants. “In some markets the prestigious medical institutions can name their price,” says Andrea Cabarello, program director at Catalyst for Payment Reform, a nonprofit that works with large employers to get some control on health costs.The Affordable Care Act (ACA) has pushed back to some degree against the high costs created by branding. In central Florida, for example, one of the top brands is Florida Hospital. This year ACA policies offered by Humana did not include services provided by this brand. Similar types of contract negotiations knocked out top hospitals in other locations. It remains to be seen whether this will cause those hospitals to reduce prices to get those patients back.

THE BOTTOM LINE
Most other developed countries control costs, in part, by having the government play a stronger role in negotiating prices for healthcare. Their healthcare systems don’t require the high administrative costs that drive up pricing in the U.S. As the global overseers of their country’s systems, these governments have the ability to negotiate lower drug, medical equipment and hospital costs. They can influence the mix of treatments used and patients’ ability to go to specialists or seek more expensive treatments.So far in the U.S., there has been a lack of political support for the government taking a larger role in controlling healthcare costs. The most recent legislation, the Affordable Care Act, focused on ensuring access to healthcare, but maintained the status quo to encourage competition among insurers and healthcare providers. This means there will be multiple payers for the services and less powerful control over negotiated pricing from providers of healthcare services.

WHERE TO FIND AFFORDABLE HEALTH INSURANCE
Whether your trip to the doctor is for something as simple as a sinus infection or something as complex as cancer, you don’t want to feel worse when you receive the bill. The cost of medical services can hit the wallet hard: there are 1.7 million personal bankruptcies every year due to inability to pay medical bills — in fact, crushing healthcare debt is the number one reason for filing bankruptcy.While having health insurance is no guarantee you won’t be overwhelmed with medical expenses in the event of a serious accident or health issue, it does let you rest easy in the knowledge that barring something extreme, you and your family can take care of your healthcare needs without going broke. Additionally, with the passage of the Affordable Care Act (often referred to as Obamacare or ACA), those without insurance in 2014 and beyond will face a penalty on their tax return — 1% of their yearly household income, or $95 per household member, whichever is higher.

CHECK WITH YOUR EMPLOYER
According to the Bureau of Labor Statistics, 86% of full-time employees in the US have access to health insurance through their workplace. If you are in this category, your lowest-cost, best-coverage option is probably going to be your employer’s plan. Group health insurance generally provides significant savings, even with rising costs for the worker’s portion of the premium. In 2013, the average employee’s cost for family health insurance was $4565 annually, with the employer paying the remaining portion of $11,786.

LOOK TO THE GOVERNMENT
For a sizable portion of the population, the government is picking up their healthcare bill, either through Medicare for older Americans or state Medicaid plans for those with low incomes. If you’re over 65, you probably already receive Medicare. While Medicare is quite complex, in simplest terms, if you paid enough taxes while working, you will receive Medicare Part A — which covers hospital-related expenses — premium-free. Medicare Part B, which covers outpatient care, doctor’s visits, medical supplies and lab tests, requires a monthly premium of $104.90 for those with an annual income of less than $85,000, and carries a $147 deductible.For those with very low income, Medicaid offers health insurance at low-or-no cost to the recipient. Though every state manages their Medicaid program differently, the general guideline is that individuals or families with income below 133% poverty level are eligible. Since the passage of the ACA, many states have expanded their Medicaid guidelines to cover far more families than in previous years. If you feel you might qualify for Medicaid, you can apply at your state’s social services department or through your state’s insurance exchange.

SHOP THROUGH YOUR STATE EXCHANGE
One of the key facets of the ACA is the creation of state exchanges to facilitate health insurance enrollment. Seventeen states run their own exchange, the remainder either default to the federal government’s exchange (which you can access through Healthcare.gov), or have a hybrid state/federal exchange program. With the advent of Obamacare, your state exchange (or the federal marketplace) is one of the easiest ways to compare insurance policies and choose the one best suited to your needs.While the individual states have a great deal of flexibility in their insurance programs, generally, you’ll find a wide range of policies with varying deductibles, premiums, out-of-pocket limits and coverage details. You may also qualify for assistance in paying for your insurance:

If your income is less than 400% of the poverty level, you may qualify for tax credits to help offset the cost of insurance

If your income is under 250% of the poverty level, you may qualify for a subsidized insurance policy

If your income is less than 138% of the poverty level, you qualify for Medicaid in those states with expanded coverage

Buy Health Insurance Direct If you don’t qualify for any of the above options, or you simply prefer to buy insurance on your own, there are several ways to shop.

Online patient financing sites: At websites like www.denefits.com, you can compare plans from multiple insurance companies, decide which offers the price and coverage that you need and apply online.

Insurance brokers and agents: If you prefer a personal touch, contact an insurance agent or broker to discuss your options in person. The agent will help you choose the right plan for you and your family.