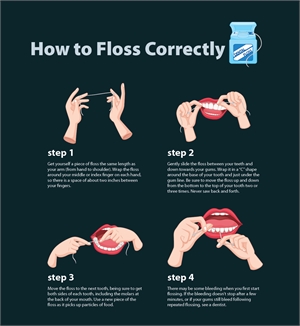 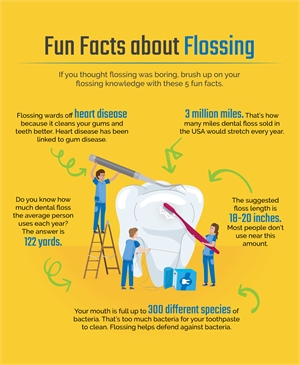 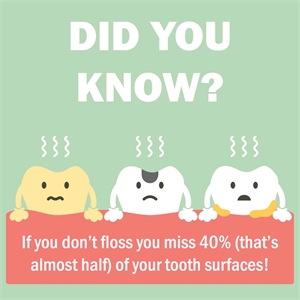 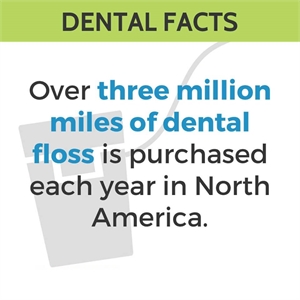 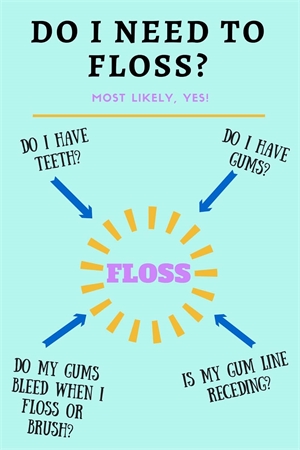 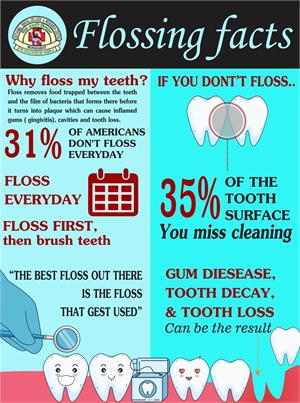 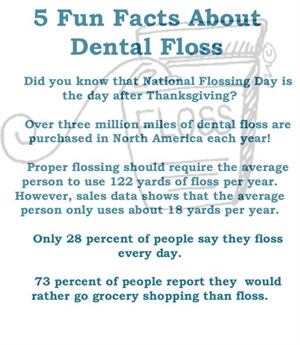 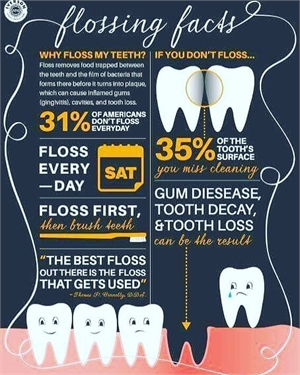 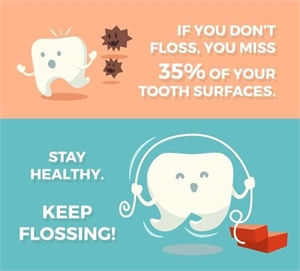 Flossing is important. There are plenty of reasons why dentists stress the activity and say no regimented oral hygiene routine is complete without it. Still, many people neglect to floss at least once daily. Curious to learn more about this oft-over-looked step in oral hygiene. Here are a few facts patients might not know.


Flossing reaches the places between teeth where a toothbrush cannot clean. And the act of dislodging and removing food debris and gunk will help reduce the risk of plaque, infection, decay, and bad breath. In fact, a lack of flossing is noted as the primary cause of halitosis.

2. Flossing cleans about 40% of teeth


Brushing can only clean so much, approximately 70% at most. This is why flossing is so important. If a patient doesn’t floss it could mean 40% of the surface of teeth goes uncleaned. For teeth that are 100% clean, patients need to combine routine brushing with routine flossing.


If a patient is new to flossing or does not floss regularly, it can cause bleeding gums. This is not an excuse to stop flossing. With consistent flossing, the gums should get stronger and bleeding will eventually subside. If gums continue to hurt or bleed with regular flossing, it might be time to schedule an appointment with the dentist.

4. Certain times are better than others to floss


People often eat more than just once a day, and that means bacteria have various opportunities to grow and thrive. Flossing right after eating is a good way to get rid of food particles. And flossing before bed will help rid the mouth of bacteria to minimize decay and other dental problems. That said, patients should not worry so much about the best time to floss and should just be sure to floss at least once per day.

5. Ideally patients should floss, rinse, and then brush


Dental professionals tend to go back and forth on the issue. Is it better to brush first and then floss? Or is it ideal to floss first, and then brush? There are advantages and disadvantages to each. Again, patients should simply find a routine that works best for them that they can commit to.

6. Patients need about 18 to 20 inches of string to floss


When it comes to flossing, more is usually more. Do not skimp on floss. Cleaning with too small a piece will prove more difficult and could spread bacteria around even more. To get a good grasp on the floss, and clean on a new section of string between each tooth, patients should use about 20 inches of string.

7. Braces are not an excuse to skip flossing


Manufacturers have developed floss with a needle-like end to aid patients with braces. This type of floss allows patients to string the floss under the wires of braces and still clean between teeth.

9. Floss comes in waxed and unwaxed


Many patients prefer waxed floss because it allows the string to glide more easily through tight spaces. But floss also comes in unwaxed string. While it is not as easy to maneuver, people with larger spaces between teeth often prefer it.

10. Floss comes in a variety of flavors


Traditionally, floss is either unflavored or mint. But those are not the only options. Floss also comes in a variety of other flavors like cinnamon, fruit, or even bubblegum. And some novelty shops also sell floss in more unique flavors like pickle, pumpkin spice, wasabi, and bacon!


The average person uses approximately 125 yards of floss per year.

12. The dentist knows if a patient has been skipping flossing


Patients might think the dentist will never know if they haven’t been flossing. But the dentist can tell. One major sign is plaque developing between teeth which calcifies into tartar. And once plaque calcifies, it cannot be removed with simple brushing and flossing.

13. Patients should not use a toothpick instead of flossing


Dentists agree that a wooden toothpick does more damage to teeth and gums. Toothpicks are also a common choking hazard. It is far better to use floss to remove food lodged between teeth.

14. Dental floss was invented by Dr. Parmly a dentist in New Orleans in 1815


He felt his invention would help remove debris between teeth and was published in his book.

15. Traditional floss is just one option of many


There are several other flossing products patients can use to remove particles stuck between teeth including dental tape, floss picks, interdental brushes, floss threaders, and oral irrigators.

Flossing should be an important daily practice if patients hope to maintain optimal oral health. Flossing does not have to be difficult or painful. Talk to your dentist if you need to relearn the proper flossing technique.