What is Ante's Law in dentistry? 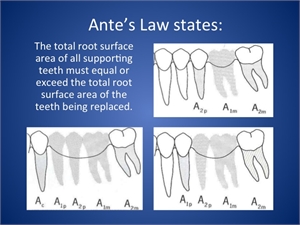 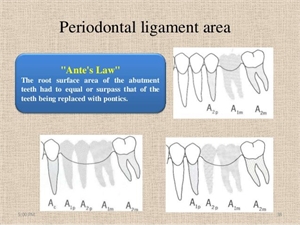 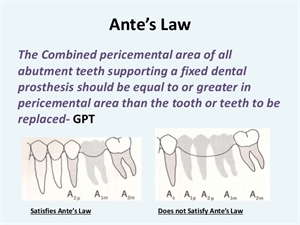 Dentistry is a branch whose main aim is to restore the functional elements of the oral cavity while simultaneously maintaining the aesthetic appearance of an individual. One of the most common dental techniques involves restoring lost teeth by fabrication of bridges and dentures. However, the construction of these dentures depends a lot on the material being used and the teeth involved.

Dentistry has many crucial laws, one of which was given by Irwin H. Ante in 1926. This law helps in determining whether the chose abutment teeth are sturdy enough to retain bridge. According to this law, the area covered by the abutment teeth must be equal or greater compared to the total teeth being replaced. In order to determine whether the abutment area is adequate, many factors need to be considered.

A tooth has two portions - a crown and a root. The crown is what can be seen with the naked eye whereas the roots are embedded in the sockets. The roots thus anchor the tooth to its desired position. In order to follow Ante's Law, the ratio of the crown and root of the abutment teeth can be 1:1, 1:2 or 2:3. This means that the dimensions of the root can be equal, double or just optimally bigger than the size of the crown.

A lot depends on the shape and the size of the root itself. Front teeth, namely central incisors, lateral incisors and canines have a single root. The canine has the longest root out of the three. Among the back teeth, the premolars have two roots whereas the molars have three or four roots. More the number of roots, the better it presents itself as a candidate for abutment. Roots of teeth that are divergent and are irregular are sturdier than others. The ones with a radial dimensions that is circular provide better support than the ones that are conical.

A FPD constructed over a longer area is likely to bend when force is applied to it. Once again, in this case the selection of abutment teeth comes into play. Even if the chosen abutment teeth are apt, the FPD's will flex. In order to reduce the risk of fracture of the bridge due to bending, it is necessary for the dentist to evaluate the underlying periodontal area in a radiograph.

The growing nature of evidence-based practice in modern times has suggested that Ante's Law remains unsatisfied in most cases. Since this law focuses on both the roots and the periodontal area (bony area surrounding the tooth) it varies in each case as to which teeth segment may or may not satisfy this law. In special cases that involves people with inherent bone defects, the selection of the abutment teeth is done differently. Moreover, in some of these case fixed partial dentures may not be opted in the first place. In complete contrast, some researchers have suggested that teeth with a poor periodontal support may also serve as good abutment teeth. Thus, Ante's Law does have its own clinical complexities.

Despite its pros and cons, Ante's Law is still viewed as a thumb rule in fabrication of fixed partial dentures. The bottom line remains that the teeth chosen for retaining the dentures should be sturdy enough to resist any forces on the prosthesis.