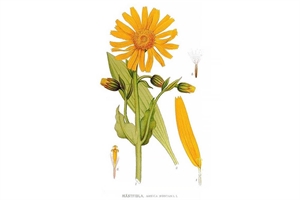 In parts of southern Russia and central Europe, grows a perennial plant by the name Arnica. It has also been dubbed as Leopard's bane, Mountain Snuff, Mountain Tobacco, Arnica Flos and Sneezewort. It can be identified by its oval leaves, daisy-like flowers that are bright yellow in colour. When the flowers are dried, they can be used for medicinal purposes. At times, roots and underground stems can also be used. The extracts of Arnica have been used in food products like beverages, candies, dairy, gelatins, puddings, etc. Arnica also has cosmetic uses in anti-dandruff shampoos and hair tonics.

Initially, Arnica was used in the treatment of sore throats. During the war, its usage was extended to treat gunshot wounds, bruises and accidental trauma. The US Food & Drug Administration classifies Arnica as an unsafe herb. Arnica's dosing is varied, and various ways of administration of the drug exist. Topical forms (direct application on the skin) exist in the forms of gels and creams. Another form is taking the herb via oral route. These forms exist as homeopathic medicines.

Arnica's dental application has come into the limelight only in the last 50 years. This homeopathic mixture is used to alleviate the oral pain in the teeth and gums. At times it is prescribed to patients with a complain of dry mouth and persistent bitter taste. The effect of Arnica is questionable in patients living in damp cold weather and in those who consume alcohol simultaneously.

Arnica finds its usage in homeopathic preparations since the 18th century. There have been conflicting views on the effect of Arnica as a pain reliever and for subsiding swellings. Arnica is said to counter the pain and swelling caused by removal of tooth extraction. Furthermore, Arnica has been prescribed for pain caused after a tooth filling (restoration) procedure. The nerves in the dentin and pulp make the teeth sensitive when triggered by external stimulus. Arnica is said to have a soothing effect on these nerves and thus ease the pain. However, homeopaths suggest that Arnica should be used in combination with Hypernicum (another flowering plant) and Hamamelis for better results against toothache. It is also said that Arnica can be taken even before a tooth removal procedure in order to better facilitate the healing after the tooth is removed. The patient is advised to consume four Arnica pills by placing them under the tongue, an hour before the procedure is carried out.

Even though Arnica is recommended for use as a toothache reliever, it should be kept in mind that this herb slows down clotting of blood. Hence, if one consumes Arnica immediately after extraction of a tooth, there is a chance that the socket from which the tooth was removed, takes a longer time to clot and heal.

Arnica's most effective use is seen as a pain reliever for osteoarthritis. This is a condition of the bone where the bones wear down gradually, causing pain and stiffness as the age progresses. Arnica's gel based formulation (50g/100g) when rubbed on the joints for 3 weeks, twice or thrice daily, can help reduce the pain of osteoarthritis.

Arnica should not be used during pregnancy as it hampers uterine contractions. However, Arnica does not have any adverse reactions when consumed in its homeopathic form. This is because it is ingested in small amounts. Reported side effects after consumption of Arnica includes irritation of the mucous membrane, stomach pain, diarrhoea and regurgitation (vomiting). Some other commonly mentioned side effects include allergic reactions and contact dermatitis (skin inflammation).

If Arnica is consumed in excess quantity, it can be toxic for the body. Inflammation of the stomach and intestines can prove to be fatal. Shortness of breath is another major complication of arnic toxicity. In children, the consumption of flowers and roots has resulted in severe episodes of vomiting, coma and even death. The recommended oral dose for children between 2 to 12 years of age is dissolving 2 or 3 pills under the tongue for 15 minutes, for four doses.

Arnica as a homeopathic remedy for toothache and other conditions has been researched with insufficient evidence. The trials done were either biased to a particular population or have been conducted on a relatively smaller group. Homeopathic remedies can take time to assert their effect in different patients, and Arnica too follows this trend.