What does bad breath treatment consist of? 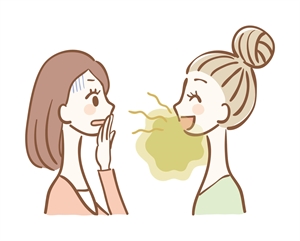 Bad breath or halitosis is a common complain that people present with at a dental clinic. The growing awareness of dental health has led to people be more aware of their oral hygiene. In such an era, bad breath can be a distressful condition for many. Before we jump into the treatment considerations of halitosis, it is important to know what are the various causes that can be the source of bad breath.

There are many variants of halitosis which an individual can present with. Firstly, there is an imaginary form of halitosis. This has two subtypes - pseduo halitosis and halitophobia. Pseudo halitosis is a condition where an individual himself or herself experiences malodor but is not detected by anyone else. The possible reason for this is the excessive use of teeth whitening products that are available in the market today. Halitophobia on the other hand is a condition wherein an individual has a fear of suffering from bad breath. It is commonly associated with anxiety and is often referred as a delusionary form of halitosis.

The second major group of halitosis is genuine halitosis, where patients actually suffer from bad breath. The causes of this might be disturbances present within the oral cavity (intraoral) or outside of it (extraoral).

The intraoral causes might be a result of decay into he teeth, gingival bleeding, bone defects, inflammation of the periodontium (structures surrounding the tooth), etc. Decay in teeth involves a cavity formation on the teeth where food debris might get lodged and be a source of malodor. Gingival bleeding can accompany swollen gums that may be due to improper brushing techniques or might accompany another condition like herpes, syphilis, etc. Bone involvement occurs when the tooth's decay has been so extensive that it has infected the pulp (source of blood vessels and nerves for the tooth), reached the roots and resulted in abscess and cyst formation. In old age patients, dentures that do not fit properly in the mouth can lead to accumulation of harmful microbes under the denture that can lead to bad breath. The same applies in individuals wearing orthodontic appliances like braces and space maintainers. Another common intraoral factor is the irregular or improper maintenance of tongue cleaning. The tongue can be a house for multiple pathogens which can adhere on it and be one of the primary sources of malodor.

Extraoral causes of malodor include defects in the respiratory, gastrointestinal and endocrinal systems. The nose, sinuses, tonsils, larynx and pharynx can get inflamed as they are prone to infections. These can act as a source for malodor as the microbes release certain compounds that emit foul smell from the mouth. Lung disorders like bronchitis, lung abscess, cystic fibrosis can also be other factors that contribute to halitosis. Gastrointestinal reflux, peptic ulcers and intestinal obstructions are the conditions of the gastrointestinal system that can also contribute to bad breath. Metabolic or endocrinal disorders like diabetes, hepatic failure and renal failure are other medical disorders that alter the odor of the breath. Consumption of certain drugs like acetaminophen, ethly alcohol, bisphosphonates, etc can also contribute to halitosis.

Halitosis occurs when some microorganisms generate a group of compounds called volatile sulphur compounds. These include methyl mercaptan, hydrogen sulfide and dimethyl sulfide. Certain foods like onions, garlic, pickles, tobacco, betel nut, etc have high sulphur content in them. Hence, we get the characteristic bad odor that we get when we consume these foods. In order to treat bad breath, it is important to restrict the release of these compounds. Here is a list of the treatment modalities:

• Mecanical debridement or cleaning of the tongue is a common treatment plan carried out in most cases. A layer of microbes called the biofilm covers the tongue. Under this layer, the papilla (taste buds) on the tongue house microbes that are the sources of bad breath. Scraping the tongue surface removes the biofilm. This is usually achieved by a tongue scraper.


• Flossing is another oral hygiene practice that is often neglected. Food debris in between teeth can be sources of halitosis. Regular flossing won't allow any food particles to settle in the interdental regions.


• Mouth rinses are the most commonly prescribed medications for the treatment of bad breath. These have chlorhexidine, zinc, triclosan or cetylpyridinium chloride as their primary ingredient. Each of them act on the volatile sulphur compounds differently. Chlorhexidine is the most effective in restricting those compounds. However, its prolonged use causes staining of teeth. Triclosan on the other hand asserts its effect for 12 hours since the time of its application.

• Essential oils like tea tree oil is often advised in order to fight against certain bacterial strains that cause bad breath.


• Flavored toothpastes (e.g. Mint) can be prescribed. Moreover, masking agents like chewing gums may also help in reducing the malodor in public places. However, these have very short-term effects and are not the definitive solutions for halitosis.


• Probiotic tablets decrease the number of bacteria in the oral cavity that are responsible for gingival and periodontal disease.


• Apart from encouraging patients to increase their fluid take, they are often counselled to give up the consumption of tobacco, smoking, alcohol and make subtle changes in their diet.


• Dental treatments involve thorough scaling and root planning followed by polishing the surface of the teeth. Carious lesions (cavities) need to be removed and the tooth needs to be filled with a restorative material. If the infection is deep, a root canal procedure can also be carried out.

Bad breath or halitosis is a condition that can often represent your oral health status or your general systemic condition. It is thus important to address and combat this condition at the soonest.