Can a child choke on a loose tooth while sleeping? 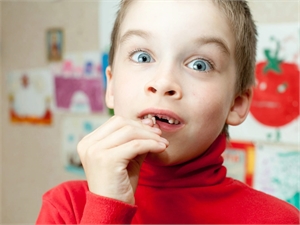 At around 6 years of age, the primary teeth begin to exfoliate and are replaced by permanent successors. By the age of 14 years, all 20 deciduous teeth are replaced and 12 other additional teeth erupt (eruption of all four third molars varies).

Before the deciduous teeth shed, their roots undergo a normal physiologic resorption, which is a result of the eruption of the underlying successor teeth. As the roots resorb, the tooth starts becoming mobile. Children often develop a habit of teasing this mobile tooth with their tongue or fingers.

Apart from this, there are also natal and neonatal teeth. These are teeth that are present at birth or become visible within 30 days after birth. These teeth if present and mobile at birth need to be extracted onpy after 10 days as the factors responsible for clotting are developed only then.

Can my child swallow on a fallen out baby tooth? What are the risks?

Parents are often worried if these natal or neonatal teeth and deciduous teeth that are loose and near to exfoliation are accidentally swallowed by their child. Patients who have neurological disorders or improper tongue position are at a greater risk of swallowing a mobile tooth.
However, there are two reasons why parents should not be too concerned about loose teeth.

Firstly, children develop a defense mechanism called the cough reflex. This reflex develops at approximately 2 months of age. Any foreign object is thus sensed and can be coughed out by the child. The second reason involves the strong stomach acids. Even if a tooth is accidentally swallowed, the acids of the stomach are strong enough to dissolve the milk tooth. This is because most of the deciduous tooth has a higher calcium content. If not dissolved, then it is small enough to be easily removed by faeces.

Parents of patients who have swallowed their tooth are first reassured and their understandable anxiety should be dealt with calmness by the dentist. Even the apprehensive child is calmed down and should instead be reminded of the tooth fairy who would retrieve the tooth.

It becomes a bigger emergency when the child begins to have blood in feces, keeps vomiting, complains of chest pains and has pain in the neck, chest or abdomen. All these are signs of an internal injury caused by the swallowed tooth. At times, the tooth may even get lodged in the lungs and the patient may even find difficulty in breathing. The child may even complain of fever and malaise.

Treatment in such cases involves  identifying the cause primarily. This is done by chest x-rays and endoscopy. Based on the source, the treatment for retrieval is planned accordingly. In rare cases, a child may swallow a permanent tooth. Since these are larger in size, they may get lodged in the intestine. In such cases a gastroenterologist is consulted.

Can my child breathe in (aspirate) an exfoliated milk tooth? What are the risks of aspirating a tooth?

Tooth aspiration or swallowing in sleep is incredibly rare. For a tooth or any other object to be swallowed, it has to pass through the epiglottis and two levels of vocal cords. Patients below the age of three however are still at a risk of swallowing the tooth during sleep due to lesser co-ordination of muscles and incomplete development of the gag reflex.

There are very few reported cases of tooth aspiration by children in their sleep. In most of these cases, the tooth is detected in the lungs on a radiograph. A wheezing sound during breathing may also be heard. A pulmonologist is best consulted for further treatment.

Aspiration of teeth by children during sleep is uncommon. However, parents must always be aware of the consequences and must consult a pediatric dentist once they learn and confirm that their child has swallowed a tooth. Parents also need to train their children in avoiding swallowing the tooth and reporting it to them if they do so accidentally.