Can I use Amoxicillin to relieve toothache? 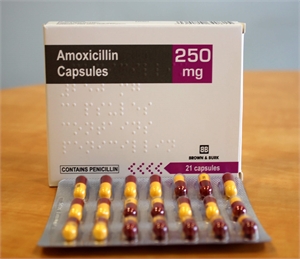 Toothache can be one of the most unpleasant feelings that can even lead to sleepless nights. Be it the milk teeth or the permanent teeth, the pearls of the oral cavity can create a rift in the mouth due to several reasons.

Toothache can occur due to a fractured tooth, a decayed tooth, a mobile tooth, impacted tooth, infection in the roots, an associated swelling, infection of the tissues surrounding the tooth, etc. When toothache occurs, it is more often due to the invasion of noxious agents released by microbes that are detrimental to the oral health. The microbes that cause these tooth infections are mainly of bacterial origin. Thus, it is important for the dentist to prescribe a medication that acts on these bacteria.

Toothache is a combination of both pain and infection. When it comes to pain, the dentist prescribes analgesics or pain killers in order to provide the necessary relief. Some of the most commonly prescribed drugs are aspirin, ibuprofen, paracetamol, etc. Now that the pain is taken care of, it is important to take a drug in conjunction with an analgesic that acts to suppress the activity of the bacteria. This is where amoxicillin comes into picture.

Three decades after Alexander Fleming discovered Penicillin, a structurally close-relative of the drug was formulated in Beecham, England. However, it took nearly 15 years for this drug to officially hit the market. This drug was amoxicillin (known as amoxycillin in Australia). Over the years, amoxicillin has gained reputation for being one of the most commonly prescribed drugs globally. This semisynthetic version of penicillin has been used in infections of the ear, skin, throat, urinary tract, stomach ulcers, etc. One of its use involves suppressing the infection prevalent in the oral cavity.

When bacteria enter the blood vessels surrounding the tooth, they might trigger an inflammatory process that can later develop into a cyst or an abscess. It can invade the bone as well and further complicate the process. When amoxicillin enters the body, it attacks the protective covering of the bacteria known as the cell wall. This cell wall gets ruptured by the action of amoxicillin. It thus results in the killing of the bacteria.

Prescribing amoxicillin should not be a mandatory practice for every dental infection. At times, the dentist can drain the abscess or remove the infection through root canal treatment. This might not need an amoxicillin prescription. It is only prescribed when the infection is deep within the tissues or bones, spreading quickly or spread across a larger area. It is also given to people with a compromised immunity who need the infection to regress as fast as possible. The effect of amoxicillin can be visible between 3 to 7 days.

There are certain individuals who might be allergic to penicillin. In these patients amoxicillin is completely contraindicated. The most common alternatives to amoxicillin for these patients are erythromycin, clindamycin, doxycycline, ciprofloxacin. Amoxicillin is usually given in a dosage of 500 mg to 2000 mg depending on the severity of infection. It needs to be taken orally at an interval of 8 to 12 hours. In children, this dosage can range between 200 mg to 300 mg and is available both in the form of a tablet and liquid medication. In infants, this dosage is further reduced between 20 to 45 mg/kg per day.

The stability of amoxicillin in an acidic environment and its potential to stay at peak levels in blood, thereby prolonging its effect makes it a desirable drug over any other penicillin derivative. Moreover, it causes minimal side effects and is thus desirable to act against tooth infection. However, it is important to remember that it has no direct effect on toothache.