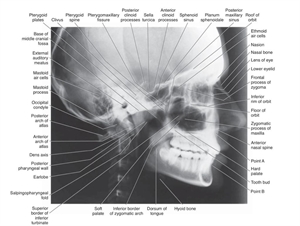 Cephalometric analysis is a detailed study of the relationship between the dental and skeletal features of the skull or the relationships between the teeth, jaw and the skull. In simple words, cephalometry implies measuring of the head. It consists of in-depth interpretation of the skull x-rays. They are taken with the help of a cephalometer which holds the head motionless in a particular position. Its accuracy and consistent position offers comparison norms making it the most effective tool for dentists, oral and maxoillofacial surgeons and orthodontists planning treatment of malocclusion.

There are two aspects that need to be kept in mind for the cephalometric analysis to be accurate, standard positioning of the head and interpretation.

Positioning of the head:

It is the standardized positioning of the head that gives cephalometry its precision and makes comparison possible. The head is always at 90˚to the beam of the x-ray. Again, this is always at a distance of 5 feet while the film is 15 inches behind the head.

Cephalograms can be taken in two positions:

In a lateral cephalogram, the profile of the patient is revealed. In this, the x-ray beam enters on the right side and the radiography film is on the left side of the face. It is therefore preferred by dentists as it highlights details of the upper and lower jaw along with the cheek bone. What makes it especially useful is the use of a true vertical. This true vertical is a reference line which is a metal chain that hangs freely from the cephalometer. As it is controlled by gravity there are no variations in it. Accompanied by the natural positioning of the head, a lateral cephalogram provides a reliable image that has consistent orientation.

In this, the x-ray beam is at the back of the head while the film is positioned in front of the face. As this offers a frontal view of the head it allows assessment of bilateral landmarks and facial asymmetry.

Analysis of the skull landmarks

Analysis begins with marking specific cephalometric landmarks and tracing facial and dental components on acetate paper. This acetate paper is placed over the x-ray film with a light source behind it. Once these have been made the various cephalometric planes and angles are constructed.

Cephalometric analysis is based on an interpretation of the angles and distances between various components of the face. This reveals important information regarding the position of the mandible, maxilla, incisors(upper and lower) as well as the proportions of the face in general.

Great info on the new dental techniques! As you have stated Cephalometric analysis is commonly used by dentists and orthodontist to study skeletal relationships in the craniofacial complex. However, cephalometric analysis also has many other uses such as prediction of success on ongoing treatment plans, evaluate a patient’s dentofacial proportions and help doctors recognize abnormalities.