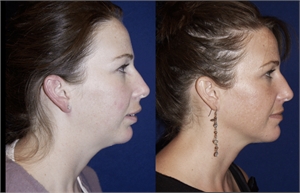 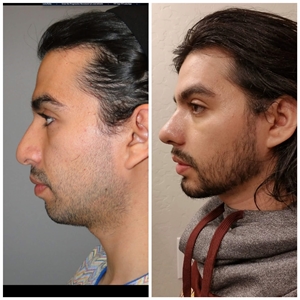 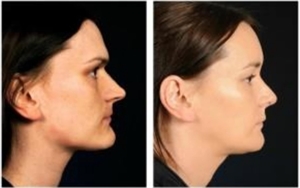 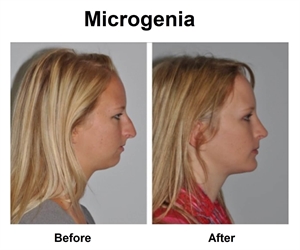 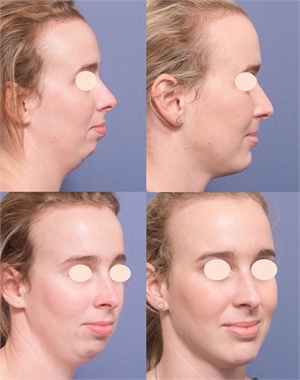 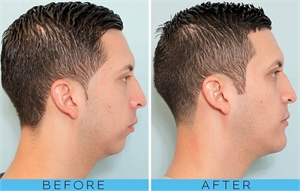 The chin is a vital structure of the lower third of the face. It makes up for an esthetic component of the face. Any deformity in the chin is easily appreciated.

There are eight different types of chin deformities:

In order to rectify these deformities, two esthetic surgeries are carried out most often:

Microgenia: It is corrected by a sliding genioplasty technique wherein the inferior segment of the chin in bought forwards and later stabilized with wires.

Macrogenia: It is corrected by reduction of a segment of the chin in a way that the chin shape does not change.

Vertical chin excess: It is done by horizontal osteotomy or tenon technique. In this technique a U-shaped cut is made in the symphysis region which can later be adjusted to the desired height.

Vertical chin deficiency: Alterations in the incisions of horizontal osteotomy, interpositonal grafting or alloplastic augmentation can increase the chin height.

Transverse deficiency: Decrease in the width of the chin can be increased by making incisions at the midline of the symphysis region and rotating the segments outwards.

Transverse excess: A broad chin can be narrowed by removing a rectangular section of bone in the middle of the chin segment.

Chin asymmetry: This is a challenging deformity since the chin needs to be made symmetrical either by following the facial or the dental midline. A horizontal osteotomy followed by sliding of the chin on the required lateral aspect is the usual method to correct this.

First described by Hofer in 1942, genioplasty is a highly versatile technique as it can readjust the chin in all three planes. It is also an excellent adjunct to rhinoplasty procedures. Despite having stable outcomes in the long run, this technique may also see various complications because of its invasiveness. Vital structures like arteries and nerves make it vulnerable to hematomas and neurosensory loss. Moreover, if the chin is malpositioned after the surgery, chances of rectifying this error are minimal.

Unlike osseous genioplasty, alloplastic augmentation involves the correction of chin deformities only in the anteroposterior plane.

Alloplastic Augmentation is needed when there is a horizontal deficiency, muscle atrophy or pre-jowl volume loss.

This technique is supposed to have originated in the late nineteenth century when precious metals like gold, silver and ivory were used. Later, autogenous materials like the bone from the patient's own rib or tibia were used in the procedures. However, the fear of transmitted diseases like HIV, donor site morbidity and studies showing unpredictable resorption led to a decline in the usage of these materials. Homologous tissues were soon developed wherein the autogenous materials were irradiated in order to reduce the chance of infection. But since the problem of untimed resorption remained persistent, researchers began to work on alloplastic materials.

Terino E.O. in 1992 gave the following  ideal features of an alloplastic implant.

Based on the above requirements, various alloplastic materials have been developed: Gortex (extended polytetrafluoroethylene), Medpor (Porous high density polyethylene), Supramid (Polyamide), Silastics (silicone rubber) and Mersilene (Dacron polyester). The latter two are more favorable materials compared to others. They have a long history of clinical use despite complications being reported in various cases.

These implant materials are placed by an intraoral or extraoral approach. The intraoral approach is more susceptible to infections and placement of the implant becomes relatively difficult. Moreover, it puts anatomic structures like mentalis and mental nerves at a great risk of injury. The extraoral approach will show a scarred tissue but is a more preferred technique since the implant placement can be more precise. It is best to use a biomaterial that is placed sub-periostally and allows for adherence to the site, either with the use of screw fixation or by ingrowth of the periosteal tissues into the implant.

Overall, the osseous genioplasty is the more preferred choice based on its versatility and patient satisfaction. Moreover, detrimental complications are more frequently encountered in alloplastic techniques compared to the osteoplastic ones.