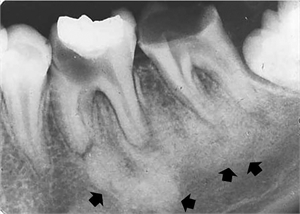 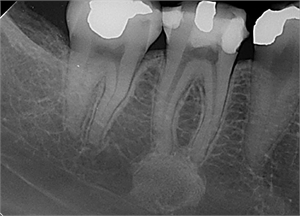 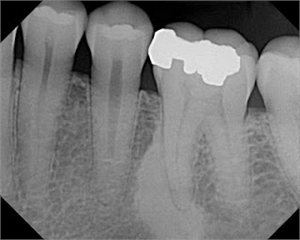 A dental x-ray tells you stories. Even though the small radiography bears colors in black and white, a dentist with a good eye can know a lot about the tooth or teeth and can link it with other internal and external factors that surround the patient. A patient presenting with or without pain can be made cautious of his or her oral health status simply through a routine radiographic checkup. There are certain conditions which appear normal on the radiograph but are actually the basis of a dental discomfort. One such condition is called condensing osteitis.

Osteitis refers to inflammation of the bone. The word before it, 'condensing' represents an increased density of the inflamed bone. The condition is also known as focal sclerosing osteomyelitis as focal refers to being localized, sclerosing is the type of bone and osteomyelitis is the inflammation of the bone. This is an anomaly that can be seen in previously infected or treated teeth or in completely healthy teeth. So how can a dentist reach the diagnosis of condensing osteitis? To begin with, this is a condition that usually affect the back teeth of the lower jaw more commonly. Moreover, the lesion is attached to the tip of the roots (apices) of the affected teeth. Hence, a dentist may often tap the tooth from the top vertically in order see if a response of pain is elicited. This test is called tenderness on percussion.

A patient may or may not feel any pain in this condition. It is important for the dentist to know whether the pulp inside the tooth is dead or alive. The pulp is the soft tissue within the tooth that contains all the blood vessels and nerves supplying that tooth. It is protected by the hard tissue layers of enamel and dentin. The testing of the pulp can be done through an electrical device through which helps in knowing how the patient reacts to the electrical stimulus transmitted through the device onto the tooth.

Once the status of the tooth is known, the bony density is now inspected. The sort of bone density that appears on the x-ray can be seen in many other bony conditions apart from condensing osteitis. The difference lies in the type of bone that is formed. In most bony lesions, an infection causes the body to react, resulting in inflammation and eventual destruction of the underlying bone. In contrast, in condensing osteitis, the infection is fought by the body, and above that bone is formed instead of being destroyed. This can be attributed to a strong immune system of the patient and a rather weak infective organism. However, in most cases the pulp is usually affected and infection does prevail within the tooth.

Condensing osteitis is usually seen in young adults. Since it is discovered on a radiograph, many cases go unnoticed. The proximity of the lesion to the apex of the root can indicate several other bony lesions and diagnosis can become tricky. However, it is a localized condition and does not spread along the jaw. The inflammation is minimal in condensing osteitis and its diagnosis through a biopsy can help in ruling out other inflammatory conditions.

The treatment of condensing osteitis includes either extraction of the affected teeth or a pulp therapy procedure (root canal procedure). Usually, the prognosis of a tooth affected by condensing osteitis is very good. A root canal treatment can resolve the issue by eliminating pain, clearing the infection and restoring the function of teeth. A condensing osteitis in a tooth that cannot be saved won't resolve even after the tooth is extracted. This is because the condition is present in the bone and not the tooth itself. However, the removal of tooth releases the pressure that acts on the lesion, thereby concluding the case.

Condensing osteitis was first identified in 1893. Ever since, it has been routinely diagnosed and treated as resolution of bony lesions became easy with advancing dental science. The affected tooth should be taken care of through proper oral hygiene once it is treated. Condensing osteitis thus is yet another reason why an individual should routinely get his or her dental check-up done at regular intervals of time.