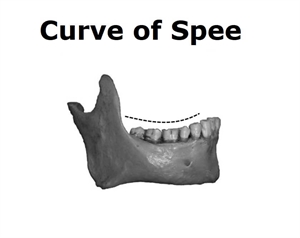 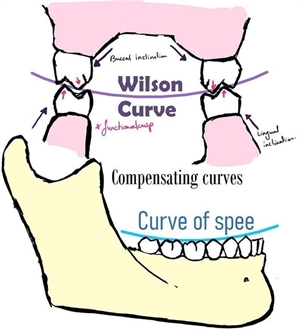 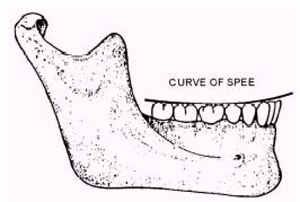 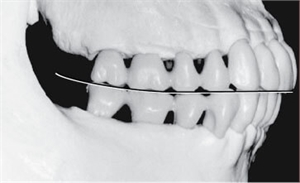 In 1890, Ferdinand Graf von Spee described the relation of the teeth to the growth of the face in the sagittal plane. He described a natural curve formed by the lower teeth that ensures a normal bite and masticatory system. He termed this the Curve of Spee. If we look at the side profile of the skull, and draw a line connecting the tip of the canine, the cusps of the premolars and molars till a point on the front border of the mandible.

The significance of Curve of Spee is of importance in planning treatment of teeth that involves aligning the teeth and while giving restorations (fillings) in areas that bears the maximum chewing force. The strongest muscle for mastication is the masseter. It is present perpendicular to the Curve of Spee. Hence, a flat or a mild Curve of Spee ensures that no undue forces are exerted on the lower teeth if the Curve of Spee is maintained.

Apart from overjet and overbite, an altered Curve of Spee might also lead to improper bite where canines might hinder it mouth closure.

Levelling the Curve of Spee

The levelling of Curve of Spee can be done by countering each of the reasons mentioned above.

Patients with extrusion of molars often have a lower facial height. Treatment in these patients must be done when their growth and development has not ceased yet. Placement of archwires or acrylic bite planes in the anterior region can help in flattening the Curve of Spee.

Incisors are intruded at a force of 12-15 g with the help of arch wires. It is usually done in patients with a longer facial height.

Incisors that are tipped towards the tongue are pushed forwards with the help of acrylic bite planes. 1 mm of forward movement of incisors causes a 4° increase in Curve of Spee.

The treatment to flatten the Curve of Spee might relapse. In order to avoid this, patients are asked to wear a retainer plate continuously for 4 to 6 months. This plate does not interfere with normal speech or mastication and also promotes regular oral hygiene maintenance. The main function of the retainer is to maintain the corrected Curve of Spee.

The Curve of Spee is an important component of a normal bite. Orthodontists study the Curve of Spee an individual by taking radiographs (lateral cephalogram) and by studying replicas (models). In growing patients, the Curve of Spee should thus be considered during treatment involving alignment of teeth with relation to the growth of face.