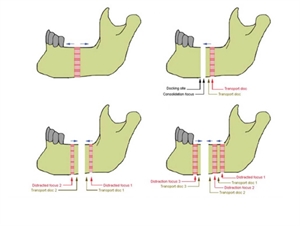 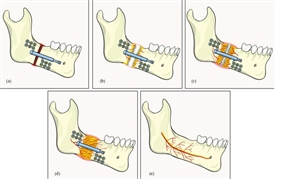 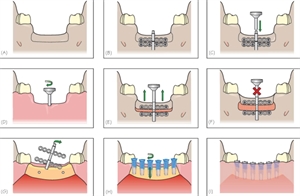 In 1901, Alessandro Codvilla performed a procedure that drew much attention. He reshaped the thigh bone and with the help of an external device capable of traction, elongated the length of the leg. It took nearly nine decades for this procedure to find its way in the oro-facial region.

The technique utilized by Codvilla and later capitalized by the Russian surgeon Gavril Ilizarov worked on the principle of generation of new bone by the body's natural mechanisms. This procedure began by reshaping the bone followed by attaching a traction device to it such that the space between the bone segments would lead to formation of new bone in the space created. Hence, this procedure is called osteodistraction or distraction osteogenesis (DO).

A DO procedure is used in various situations that need surgical intervention. It is used when there is a need to advance either jaw, ankylosis of temporomandibular joint, alveolar clefts, deficient zygoma, sleep apneas and various craniofacial syndromes. A major advantage of this technique is that it can be performed across all ages.

Initially, the bone of interest is osteotomized; meaning, that the bone is reshaped and contoured in a manner that can facilitate new bone formation. The surgeon should take care that the osteotomy is not too invasive. It is crucial to preserve the osteogenic or the bone-forming tissues and the blood vessels in the surgical region. The next step involves attaching an external device known as distractor. This device is more favorable placed externally, though some devices require its placement to be internal. The role of this device is to pull the bone in a pace and direction that does not hamper any other surrounding anatomical structures. Selection of the distraction device depends on a lot of factors and is central to the process of DO. A traction device might take the support of a tooth, bone or a combination of both. Moreover, the amount of lengthening needed, the space available for the attachment of the device and the compliance of the patient are other factors that challenge the maxillofacial surgeon's decision.

Once the distraction is attached, three phases determine the success of the technique. The first is called latency, which lasts for 5-10 days. During this time period, the bony callus that form prior to the formation of actual bone begins to take shape. In DO procedures of face, latency periods are shorter since the callus form faster due to a rich blood supply. Following the latency phase, the distractor is activated for stretching the bone in a pace that varies for each case. Once the bone is brought to its desired length and the bone segments incorporate the new bone, the device is inactivated. Finally, a consolidation phase is entered, wherein the bone segments are fixated with a rigid device. The last two phases might take weeks together and is solely dependent on patient factors.

An advantage of DO is that it can cause the expansion of soft tissue simultaneously. However, if the distraction rate is not controlled, the excessive strain can cause a rupture of the soft tissues, worsening the anatomical site. Patients suffering from bone diseases like osteoporosis are no candidates for DO. Individuals allergic to metal should not be recommended metallic distractors. However, non-metallic distractors can be used for them. In addition, bioresorbable distractors are also available and are used in infants with congenital abnormalities. Bleeding disorders, Blood coagulopathies and immunocompromised individuals are also not suitable for DO. In pediatric patients, damage to tooth follicle might occur in case of an increased traction on the alveolar bone. Some invasive DO techniques might leave facial scars.

Even after weighing its various pros and cons, it is safe to say that DO is one of the best techniques we have today for reconstruction or correction of deformities in the oro-facial region. Researchers have tagged it as one of those techniques that engineers the tissue in a natural way. It is often a choice of treatment over grafting procedures. Studies have also shown that following a DO technique, dental implants can also be placed on the new bone. Recent advances in DO include usage of devices that are computed. A software helps in drawing a treatment plan by analyzing the bone in a 3D mode.