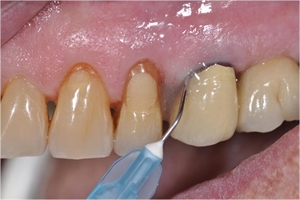 Elugel is a medication that is used for dental conditions. The primary usage of Elugel is to use it as an antiseptic. The oral cavity is a hub for various species of microbes that are capable of causing inflammatory conditions of the gums, tongue, palate and the periodontium (tissue complex surrounding each tooth). Elugel works by effectively inhibiting the spread and killing these microbes. Pierre Fabre Oral Care and Win Medicare are two most famous manufactures of Elugel.

Elugel consists of 0.2% chlorhexidine. Chlorhexidine is an antimicrobial agent that works by disrupting the bacterial cells. In the oral cavity, bacteria that survive both in the presence and absence of oxygen prevail. Chlorhexidine acts on both these types of microbes by invading their cell walls and thus changing their inner equilibrium. A major advantage of chlorhexidine is its property of substantivity. This means that it is able to exert its effect for a prolonged period after its application.

Indications for using Elugel in the mouth

It is used for the following  oral conditions:
• Gingivitis: Inflammation of the gums
• Mucositis: Inflammation of the inner linings of cheeks
• Plaque: The antimicrobial effect prevents the accumulation of the plaque on the surface of teeth
• Candida: Fungal infections of the mouth are prevented by the antimicrobial effect
• Dental caries: Actions of microbes responsible for tooth decay are restricted.
• Aphthous Ulcers: Ulcerations of the mouth can be treated by this oral rinse.
• Gingival healing: Following some oral surgery procedures, Elugel can be used for faster healing of the tissues.
• Denture Stomatitis: Denture wearers often develop a soreness in the soft tissues. This inflammation can be controlled by Elugel application.
• Halitosis: Effective reduction of microbes can reduce the secretions that lead to malodor or bad breath.

Elugel is used after brushing and flossing the teeth. Ensure that you wash your hands before applying it on the affected area. A pea sized portion is gently massaged on the gums. In children under 6 years of age, Elugel must not not be used. However, an oral rinse equivalent of Elugel can be used in children between 6-12 years of age under supervision. 15 mL of this oral rinse is swished in the mouth for 30 seconds and expectorated later. The 15 mL quantity is measured by marking the bottle cap on which a line is indicative of the 15 mL mark. The oral rinse should not be swallowed. Patients should not consume any eatables for two to three hours after expectoration of the oral rinse or after application of the gel. Elugel should be used twice (once in the morning, once in the evening) in a day.

Common
Elugel oral rinse can stain the teeth or can discolor the already present tooth fillings. However, these stains can be controlled by regular brushing methods. Another common side effect is altered taste in the mouth. In this case, the affected part is usually the back of the tongue.

Rare
Patients may also complain of a dry mouth following the use of Elugel. In some patients with a sensitive mucosa, gingival irritation may also take place. Shortness of breath, pharyngitis and nasal congestion are other rare but reported side effects of Elugel.

• Elugel is available as a 20 g or 40 ml gel tube.
• Using it twice daily for 2 weeks can help in an overall reduction of nearly 30% of microbes in the oral cavity.
• The gel formulation of Elugel is superior to its oral rinse counterpart. This is because of the faster absorption of the gel and better localization of the medicament in the affected area.
• Patients should avoid the consumption of alcohol while being treated for oral conditions with Elugel. It is said to interact adversely with Disulfiram, a drug used for the treatment of chronic alcoholism.
• Elugel is approved for usage in India, USA, Japan and member nations of the European Union.