Is articaine safe in children as a dental anesthesia? 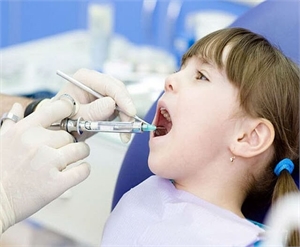 When was articaine developed?

The most commonly used local anesthesia is lidocaine. Even though lidocaine has been the gold standard for dental anesthesia since many decades, many anesthetic agents have been developed that aim to be absorbed quickly and anesthetise the area of treatment for a longer period of time. One such agent is articaine. Articaine was developed in the early 1970s in Germany. It was then marketed under the name Carticaine Hydrochloride. Its unique molecular structure is such that it can diffuse into hard and soft tissues easily. Moreover, it is eliminated from the body quickly and thus has a very low systemic toxicity. It is 1.5 times more potent than lidocaine, meaning that a lower volume of solution has a greater concentration of drug.

Articaine's efficacy has been well-proven in adults. Initially, 2% concentration of the solution was tested to check its efficacy. In 1984, the US FDA approved the drug for use in 4% concentration and carticaine was now renamed to articaine. In children a 4% concentration of articaine in 1:100,000 ratio with epinephrine is most commonly used. Epinephrine is a vasoconstrictor that increases the depth of penetration of the anesthetic agent (e.g. articaine) and also reduced bleeding at the surgical site. Articaine's pediatric dosage is 5-7 mg/kg for children between 4-12 years of age. Even though manufacturers do not recommend the use of articaine is children less than 4 years of age, clinical studies have indicated otherwise.

Side effects of articaine

Local anesthesia involves numbing only the teeth of concern. When only one tooth is to be anesthetized, an infiltration technique is used, where the site of injection is adjacent to the concerned tooth. However, when multiple teeth in the same quadrant of the jaw are to be treated, then a block anesthesia is given, where multiple nerves are numbed at the same time. Articaine has shown to be effective as an infiltration agent. In fact, studies have shown that it is even more effective than block anesthesia given by lidocaine. An articaine infiltration is given in the gap between the gums and the cheek in line of the corresponding concerned tooth.

Articaine or licocaine - which anaesthetic is stronger?

A condition called Molar Incisor Hypomineralization (MIH) is gradually becoming more prevalent in children. It is characterized by weakened surface of selected teeth in the oral cavity that makes the patient extremely sensitive to pain. Achieving anesthesia in these patients is difficult and lidocaine has not always been that effective. However, studies have shown superior efficacy of Articaine in these cases. Some clinicians also prefer the use of insulin syringe to administer articaine as the thin needle tip can be less painful.

With respect to safety aspects of articaine in children, researchers have ensured that vital signs like oxygen saturation, blood pressure, heart rate, are all in normal range after anesthetising the concerned teeth for an otherwise painful procedure. Articaine begins its action approximately 4 minutes after being injected and the effect stays for approximately 45 minutes. No adverse reactions of articaine have been recorded till date in children. It is thus an extremely safe anesthetic for children more than 4 years of age who are supposed to undergo root canal treatments, extractions or any other invasive surgical dental procedure. For children below the 4 years of age, even though literature has proven it to be safe, manufacturers of the drug still prohibit its use in this age group.