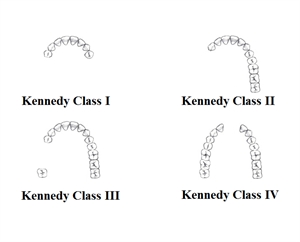 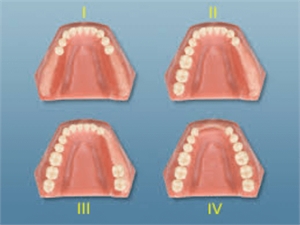 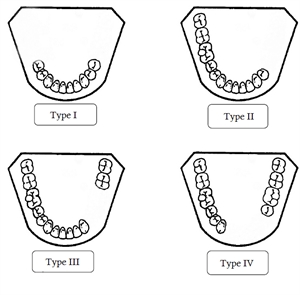 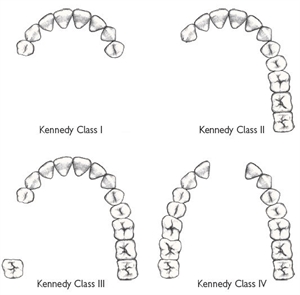 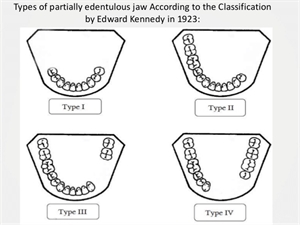 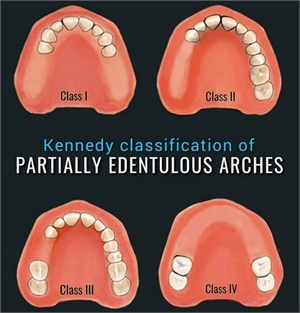 Restoring missing teeth has always been a challenge for the dentists. Nowadays we do everything we can to save every single tooth because restoring these gaps can turn out to be a nightmare. However most of the patients that we see in practice have had bad dental experience and their dentition is not quite perfect. Some patients have several missing teeth and restoring a sound dentition must be given high priority.
In order to help ourselves with the treatment planning dentists have created classifications for almost every aspect of dentistry. In this way we have the proper protocols for action and can easily evaluate the outcome and the success rate of a given treatment.
Classification of edentulism (condition of having missing teeth) has been created by Dr. Edward Kennedy and it is known as the Kennedy classification. It is easy to remember, simple and practical. Depending on the location of the missing teeth Kennedy classifies the edentulous jaw conditions into 4 main classes. This classification is meant to indicate the type of the prosthetic treatment. Depending on the Kennedy class, the partial denture is known to have certain advantages and disadvantages in terms of strength and stability.
Kennedy classification contains 4 main groups:

Kennedy class II - A unilateral edentulous area located posterior to the remaining natural teeth. The patient has missing posterior teeth only on one side of the dentition (there is only one free-end saddle).

Kennedy class III - A unilateral edentulous area with natural teeth both anterior and posterior to the area. There are no free-end saddles due to a presence of an abutment posterior tooth on one side of the jaw. This class is most commonly seen on patients.

Kennedy class IV - A single but bilateral (crossing the midline) edentulous area located to the anterior of the remaining natural teeth. It is rarely seen because patients usually loose the posterior teeth first. The Kennedy Class IV may be due to an accident and knocked out front teeth.