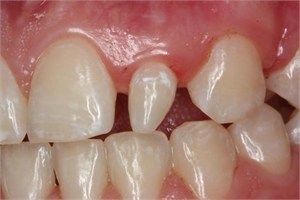 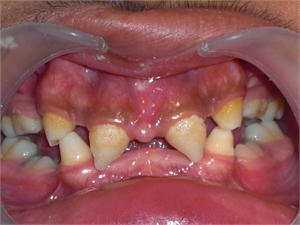 Microdontia is a dental condition in which a patient has teeth that appear to be smaller than usual. The microdontic teeth have shorter roots and smaller size, or are malformed and cone-shaped. This phenomenon affects a single tooth or a pair of teeth especially the maxillary laterals and the third molars. The affected teeth, also known as microdonts, can be with a normal or abnormal morphology.

Depending on the size of the tooth structures the condition can be categorised into three types:


The adjacent teeth may shift due to the space left by the smaller tooth and this may result in a malocclusion, or an abnormal bite. The factors responsible for microdontia are obscure. However, both genetic and environmental factors are involved in the etiology of the condition. A generalized microdontia (the condition has affected the whole set of teeth) is rare and is reported in radiation and chemotherapeutic treatment during the teeth development stage.

Microdontia can be corrected through several methods. One method is by placing crowns on the teeth. If the roots of the affected teeth are adequate then a temporary crown is placed on the teeth as they grow, this will aid the teeth in maintaining position and normal spacing. This method of correction is not used on teeth that do not have adequate roots since they are not strong enough for normal sized crowns. Due to their weakness they cannot be used as a support for a bridge. If an extra tooth is present then it can simply be removed to create room for the normal spacing of the other teeth.

It is important to note that permanent crowns can be placed once the teeth are fully grown and developed. The roots of the primary teeth are inadequate and unable to carry the occlusal load. When a deciduous tooth has to be extracted, space maintainers may be placed to act as placeholders until the permanent teeth grow in. When microdontia occurs in adults, dental implants may be placed with normal-sized crowns in order to replace the microdont.