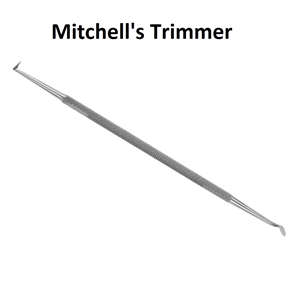 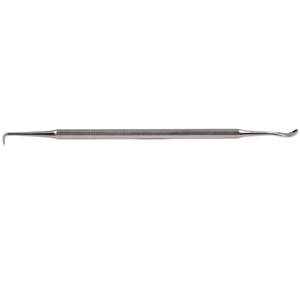 Dr. William Mitchell (1854-1914) was an American who lived the rest of his life in London after graduating. He had an innovative mind, and constantly seeked an upgrade in dentistry and dental equipment in particular. He is credited to invent nearly fifteen dental instruments that had a range of applications. One such instrument is the Mitchell's Trimmer. This instrument is used even today to perform more functions than what is was intended for initially.

Mitchell's Trimmer is also known as an osteocarver or osteotrimmer. It was first mentioned in the catalogue of dental instruments in 1899. This hand-held instrument is a double-ended instrument, meaning that both its ends have a specific function. William Mitchell in his first description about the instrument tagged it as a 'facile' instrument for dental practitioners. He suggested that it takes minimum effort and to produce efficient results with the Mitchell's Trimmer. One end of the instrument is shaped liked a spoon and is 3.4 mm wide. The other end in angulated with a pointed end, the width of which is 1.6 mm.

Before the advent of airotors (dental drill) that is now a mandatory equipment in a dental clinic, dentists used to use hand-held instruments that were designed for specific function. When a patient was supposed to be receive a capping (crown), the tooth had to be prepared in a manner that the crown was received, retained and could resist any forces. Today, this procedure, known as tooth preparation is done with airotors. However, back in the day, a mallet and chisel were used to carry out this function. The most tedious part was to shape and trim the cementoenamel junction (CEJ). This is the part of the tooth where the enamel of the tooth and the cementum (covers the tooth's roots) meet each other. The Mitchell's Trimmer was thus employed to carry out this particular function and was thus its first intended use.

Once the airotors made their appearance in the dental clinic, it seemed that the Mitchell's Trimmer might soon be out of fashion. Instead, the two working ends of the instrument are today more useful than ever. They are now used in the following areas in dentistry:

• To remove debris from the "pockets" that are formed when there is loss of attachment between the lining of the tooth or teeth and the gums. This task is accomplished by the spoon-shaped end of the instrument.


• To remove cysts near the tooth socket. A cyst can be scooped out with the spoon-shaped end of the Mitchell's Trimmer.


• To remove sharp, bony prominence emanating from the bone that holds the tooth. The sharp angulated end of the instrument carries out this function.


• To trim the ends of the palatal mucosa in patients with a cleft palate. Cleft palate is a condition were there is a split or opening in the palate. Once the closure of the palate takes place by means of surgery, the lining of the palate is shaped and trimmed with the help of Mitchell's Trimmer.


• To remove excess cements after placement of bands. In dentistry, as a part of treatment plan for certain conditions, the dentist gives an appliance that is wore by the patient for a said number of time period. The appliance needs to be fixed in a proper manner, such that it does not get dislodged from the oral cavity. Certain teeth act as anchorage units, to which a ring-shaped band is placed. The wire component of the appliance is attached to this band. A cement is used to fix the band to the tooth. Once placed, the excess cement will flow out and this is removed by the sharp-end of Mitchell's Trimmer.


• To shape a composite filling. A decayed tooth can be restored with a suitable filling material once all the decay is removed. Once the filling is placed, it can be shaped with the help of a Mitchell's Trimmer to replicate the lost tooth structure.


• To raise mucoperiosteal flaps. In certain surgical procedures, it becomes necessary to raise the gingiva that covers the tooth's roots from its maximum depth, thereby raising a flap. This function can also be carried out by the Mitchell's Trimmer.

Mitchell's Trimmer has cemented itself as one of the most vital instruments needed in the dental clinic. It's multipurpose characteristic and two different working ends with a common shank has thus eased the workload for most dentists.