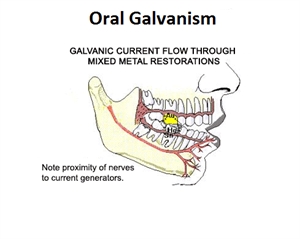 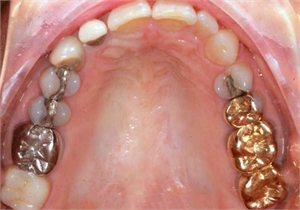 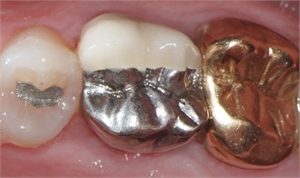 Metal fillings for teeth have been used from ages due to ease of use, its ability to withstand chewing force and cost effectiveness. Amalgam fillings, for example, are made of silver, zinc, tin, copper and mercury of which mercury is about half of the content. Some people opt for gold fillings or silver fillings or may have porcelain fused to metal crowns. Therefore person may have a cocktail of metals in his mouth, each with a different electrical potential. The concern is that the presence of this concoction of metals can give rise to oral galvanism.

Oral galvanism is observed in patients having metal fillings of diverse electrical potentials in teeth that are either next to each other or opposite each other. Saliva serves as a conductor through which a mild current passes between two different metals in the mouth. Thus, it creates an appropriate environment for ion exchange. This can also occur when there are metallic restorations of different metals in the upper teeth and lower teeth. These two can come in contact and the circuit is completed by oral tissues.

For those who have felt a sudden galvanic shock when a spoon touched their metallic inlay within the mouth can understand the degree of discomfort it produces. Typical symptoms that indicate oral galvanism are a metallic or a salty taste, burning mouth, tingling, rashes, tooth sensitivity and pain. However, the effect of electrogalvanism is not limited to the oral cavity, it also has systemic implications such as chronic fatigue, loss of memory, headaches, sleep disturbances and irritability. In fact, it is thought that this can also lead to disruptions in the central nervous system. It has also been observed that the cellular changes induced by oral galvanism are comparable to those observed in oral squamous cell carcinoma cells.

It is not necessary that every person with different metal fillings may experience oral galvanism. This is a rare condition that occurs only in certain persons which may be due to lower thresholds. It has been suggested that the existence of this syndrome can be confirmed by using a dental dam between two dissimilar metal fillings. If the sufferer reports relief from his symptoms, then he is most likely suffering from this disorder. The current can also be measured with the help of oral galvanic meters which can detect the strength of the current.

There is a view that propounds that this phenomenon is self-limiting as the effect of polarization sets in. This means that the patient suffers a sharp sense of pain which eventually subsides. However, for those whom oral galvanism causes considerable discomfort, certain solutions are offered. Painting a coat of resin on the offending fillings has also been suggested as a solution to break the circuit. Ultimately, for some, the only option may be removal of amalgam fillings. This comes with its own repercussions for the patient as it releases mercury vapors in the mouth. The benefit of removal needs to be carefully evaluated against the level of damage being caused by oral galvanism before arriving at a decision.

Oral galvanism is the most common among the patient undergone metal fillings, crowns, bridges, implants, partial dentures and saliva. However, this can e prevented by having a choice of non-metallic fillings, inlays/on-lays, crowns, bridges and dental implants. A great way to start is with a biocompatibility test for dental materials.