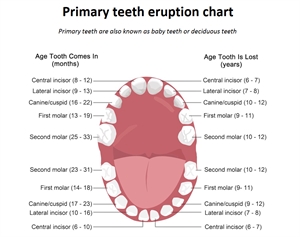 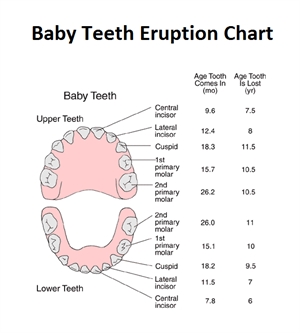 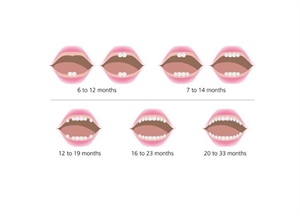 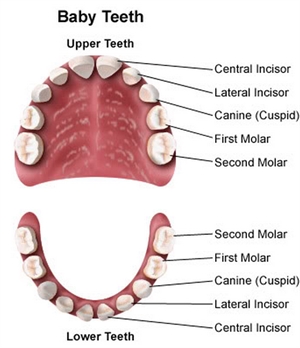 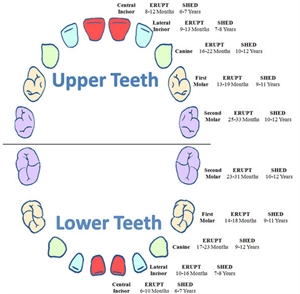 The first primary (deciduous) teeth to erupt are generally the mandibular central incisors, at about 8 months of age. These teeth are followed by the rest of the maxillary and mandibular incisors, and at 16 months of age by the primary first molars. The establishment of occlusion of the first molars is an important event in occlusal development because occlusal height and intercuspation become established for the first time.

The primary dentition is usually complete around two and a half years of age with the eruption of the maxillary second molars.


The anteroposterior intermaxillary relation of the primary posterior teeth has, in most children, a so-called mesial step between the distal surfaces of the second molars. This means that the mandibular posterior teeth, as in the neutral permanent dentition, are more anteriorly situated than the maxillary teeth. A large minority of children, however, have a flush terminal plane which means that the distal surfaces of the deciduous second molars are in the same frontal plane. A smaller percentage of children have a distal step. This distal step implies a relatively more posterior position of the maxillary teeth.


During the first years of life there is considerable growth of the jaws and alveolar processes. This growth provides pace for developing primary dentition and results, in most chilldren, in a small surplus of space (i.e. small spaces between the primary teeth). The large spaces are often found mesial to the maxillary primary canines and distal to the mandibular canines; they are called primate spaces. After the eruption of all primary teeth, and before the mixed dentition, no great changes of the dentition are seen clinically, except for the progressive wear of the teeth. The attrition on primary teeth is often marked.

There are several notation systems used to pinpoint a tooth in the dentition. The teeth numbering charts are: