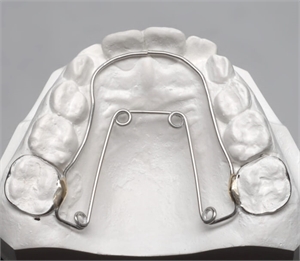 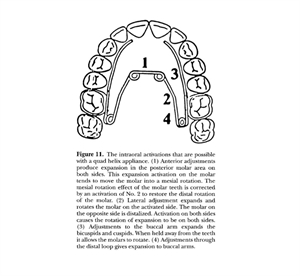 One of the most common problems in orthodontics is a narrow maxillary arch. This often leads to an occlusal anomaly known as crossbite. Depending on its nature, the crossbite can be seen in the anterior or the posterior region and has multiple repercussions on the dental harmony, temporomandibular joint and skeletal symmetry.

The quad helix is an appliance that falls under the category of slow maxilla expanders. This appliance is supposed to be a modification of the transpalatal Coffin spring appliance. In 1975, Dr. Robert Ricketts described the quad helix for the first time.

How is Quad Helix constructed?


The quad helix has four helices, two placed anteriorly and two placed posteriorly. Shaped in the form of the letter 'W,' the two anterior loops form the anterior bridge. This bridge is in line with the distal portion of the canines. The posterior loops that are placed distal to the first molars are a part of the buccal arms that are parallel to the palatal surfaces of the maxillary teeth. The entire appliance is made with a 1 mm stainless steel wire or a 0.038" preformed elgiloy.
Each loop adds 25 mm of wire to the appliance which decreases the magnitude of force. This leads to a prolonged action of the appliance.

How to activate the Quad Helix expander?


The quad helix can be activated both intra-orally and extra-orally. Extra-orally, the anterior helices are opened 1.5 mm for intermolar expansion. Later, the posterior helices are opened 1 cm for counteracting mesial molar rotation.
Intra-orally, three bends are given. The first bend is given on the anterior bridge. The next two bends are given on the palatal bridges to expand lateral arms and counteracting mesial molar rotation.


• Crossbite and crowding cases wherein upper arch needs to be expanded. The appliance can be modified by making anterior loops on the palatal arms.


• Class-II cases where the molar needs to be rotated distally.


• For expanding Maxillary arches, which is usually seen in Class-III cases.


• A mandibular quad helix is a rare modification of this appliance wherein minimal expansion of the mandible is needed.


• In cleft lip and cleft palate cases during the initial stages of the treatment plan.


• Can be used along with a headgear tube in protraction face mask.

• The appliance is cost-effective.
• It is used in non-compliant patients.
• It has a large range of activation.
• This appliance has a lesser chance of relapse.
• Owing to its construction, it helps in differential expansion.


• The quad helix causes buccal tipping of molars, leading to an open bite.

• It cannot be used in cases needing major skeletal changes


The quad helix appliance causes physiologic expansion with a force ranging between 200-600 grams. In paediatric patients, a 0.92 mm of midpalatal expansion is seen and an average intermolar expansion of 5.88 mm.
The appliance exerts approximately 5N of force on the dental structures.

Clinical Aspects:
• Patients should be reviewed on a six-week basis
• Extra-oral activation is preferred over Intra-oral expansion
• Post-treatment a three-month long retention period is recommended
• Patients should be asked to avoid hard and sticky foods and maintain a proper oral hygiene regularly

In 1983, Dr. Robert Wilson and Dr. William Wilson introduced the 3D Fitting system. This led to an increased versatility and control of the orthodontic forces in all three planes. Two stamp posts are laser soldered to the quad helix and a vertical inserting tube. According to Wilson, activations of the 3D Quad helix should be posted every 40 days and the activation should not exceed 1-2 mm. Through the 3D system, along with the expansion, the maxillary molars are properly torqued and tipped aptly.
Overall, the quad helix serves as one of the best slow maxillary expansion devices that usually causes the necessary orthodontic and orthopaedic changes.