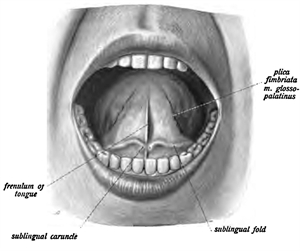 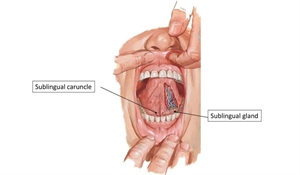 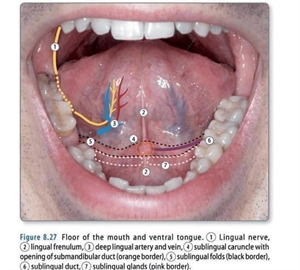 In biology, caruncle is derived from a French-Latin Terminology that meant "flesh." Anatomically, caruncle refers to a small fleshy growth. The human body contains three types of caruncles: Sublingual, Urethral and Lacrimal. Dental professionals are more concerned with the sublingual caruncle or the caruncula sublingualis.

There are three major salivary glands in the oral cavity: Parotid gland, Submandibular gland and the Sublingual gland. All three glands have their own ducts through which their secretions are excreted in the oral cavity. The submandibular gland's duct is called the Wharton's duct. This duct runs above the mylohyoid muscle, goes forwards and medially above the floor of the mouth and finally ends beside the lingual frenum. In its final course beside the lingual frenum, the sublingual caruncle is joined by the excretory ducts of the sublingual salivary gland: Ducts of Rivinus (minor) and Bartholin's duct (major). Hence, the region where the Wharton's duct, Bartholin's duct and the Ducts of Rivinus meet on either side of the lingual frenum is called the Sublingual Caruncle or the Sublingual Papilla.

When there is a calculi present in the salivary duct, the obstruction of the salivary flow causes an inflammatory response. This condition is called sialolithiasis. When such an obstruction occurs in the submandibular or the sublingual region, it causes a swelling in the region of sublingual caruncle. The submandibular duct is the most affected duct in cases of sialolithiasis because of its tortuous course. Treatment of this includes extraction of the calculi causing the obstruction.

A ranula is a mucocele on the floor of the mouth. It is a mucous extravasation cyst caused primarily due to an injury to the sublingual or submandibular salivary glands. It can be either a superficial swelling restricted to the sublingual region or a deep plunging lesion that extends cervically. Depending on the size and intensity of the ranula, various surgical treatments have been proposed. A modified L-shaped incision is often used while excision of the ranula along with the sublingual gland. In this incision, the distal part of the mandibular first molar, the sublingual caruncle and the submandibular duct are taken as reference anatomic landmarks.

Surgical treatment of Ankyloglossia can be done by three procedures: frenotomy, frenectomy and frenoplasty. In uncooperative children, surgical procedures for ankyloglossia are done under general anaesthesia. This is because the sublingual caruncle and the deep lingual vein are at the greatest risk of injuries due to bodily movements of the child.

A few cases diagnosed with celiac disease, a chronic intestinal disease has shown the presence of symptomatic lesions in the oral cavity. These lesions lasted for a month and were most commonly found on the tongue, the sublingual caruncle region, the vestibular fornix and the lingual apex. Topical medicaments provided an instant relief against these lesions.