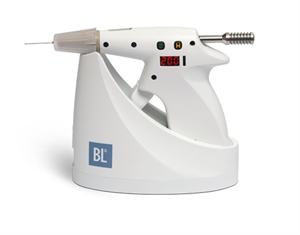 Obturation or filling of root canals is an essential step in determining the success of a root canal treatment. Over the years, many endodontists have come up with newer ways to fill the canals so as to obtain a fluid tight seal at the apex and System S is one such system which employs introduction of thermoplasticized (warmed and softened) guttapercha (GP) into the canals with the help of  a syringe or cartridge. The use of a syringe to insert GP has been called the squirt technique and has been popularised by Dr. John Stropko. The many units which assist in a squirt obturation are Calamus, Obtura, BeeFill, Elements, Hotshot and Ultrafill.

2)     Apices which have opened due to resorption of tooth structure

1)     Spaghetti phenomenon (gross over filling of the root canals)

The canal should be cleaned and shaped so as to form a continuously tapered cone and should comply with Schilder’s requirements of forming a three dimensional obturation unit. Care should be taken to maintain the patency of the minor apical constriction and any unnecessary instrumentation that may enlarge the apical foramen should be avoided.

Proper irrigation should be done between cleaning and shaping the canals so as to disinfect it and flush out all the debris. Sodium hypochlorite, 17% EDTA, chlorhexidine and MTAD are a few irrigants which serve the purpose.

After irrigating the canals, they should be dried appropriately using the F.I.R.E protocol –

I – Initiation of fluid agitation for ‘tsunami effect’

The canals should then be air dried. A sealer should be mixed (on the thin side) and inserted into the canal while the excess should be absorbed using an absorbent point. The GP should be preheated in the gun and the needle should be positioned such that it reaches 3-5 mm of the apical preparation. Once heated, the GP should slowly be injected into the canal by squeezing the trigger. As the GP flows apically, the needle backs out. Pluggers dipped in alcohol should be used in conjunction with the unit to compact the GP and compensate for shrinkage on cooling. GP may be inserted in segments to fill the canal.

Although the System S demands meticulousness in preparation and dedication to all the the steps of treatment, the results are par excellence when it comes to obturation of a root canal system with complex anatomy.