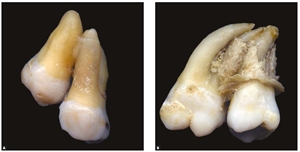 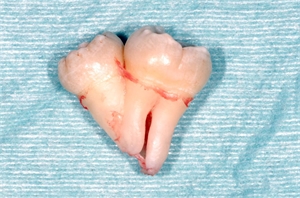 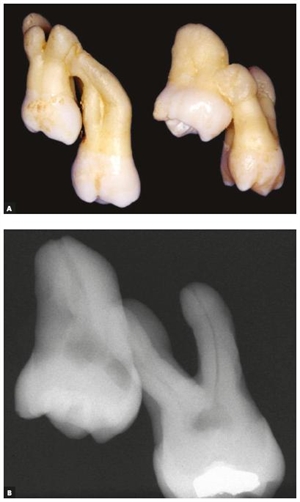 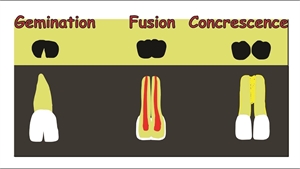 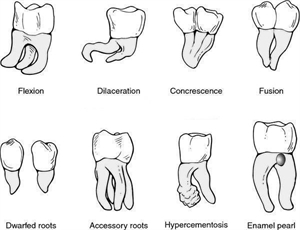 Each human tooth has a particular form and function. The position of each tooth in the oral cavity directly affects the functional abilities of the oral cavity. Any unwanted changes or hindrance occurring during the development of the tooth leads to an anomalous fomation of the tooth or teeth. One such anomaly is fusion. Fusion, as the name suggests, is two or more teeth conjoined with each other. This fusion can occur by two teeth sharing the same enamel, dentin, pulp or the roots. The hard tissue layer covering the roots of the teeth is called cementum. When two teeth are fused as a result of a common cemental layer between them, the anomaly is called concrescence.

Concrescence can occur during the process of root formation or after the completion of root formation. Patients with concrescence have often reported with a history of trauma. However, that is not the only reason behind the anomaly. An arch with severe crowding of teeth may also cause severe resorption of the bone between the two teeth. This can lead to the roots of the two teeth come in close proximity with each other and eventually fuse.

Another mechanism through which concrescence may take place is called a post-inflammatory concrescence. In this, a carious lesion on the surface of the tooth can lead to the decay extending to the roots of the tooth, leading to increased pressure in the radicular (pertaining to the roots) region. This causes bone resorption and excess deposition of cementum, leading to two adjacent teeth fuse with each other.

Concrescence is one of the most challenging conditions to be diagnosed in the oral cavity. Most conditions of the oral cavity can be diagnosed through clinical and radiographic means. Concrescence defies both these methods. Firstly, it is impossible to diagnose oncrescene clinicaly. Since concrescence takes place at the roots of the teeth, the crowns will appear completely normal. A radiographic image of concrescence might be misintepreted as two roots overlapping each other. Thus, radiographic images should be taken with two different angulations to completely confirm the presence or absence of concrescence. Quicker and more accurate diagnosis can be done through cone beam computed tomography (CBCT) which shows a three-dimensional image of the affected region.

The extent of concrescence can be restricted to one small spot, to a solid mass, to an entire root surface being shared between the two involved teeth. The two teeth involved can be two molars, a molar and a supernumerary tooth, a molar and an unerupted tooth, and a molar and an impacted tooth. Concrescence is most commonly seen in upper molars. It is more commonly seen in the permanent dentition compared to primary dentition. Due to its relatively rare occurrence, there are no epidemiological studies that give us an insight on the age, race and gender that are commonly associated with concrescence.

Teeth with concrescence once diagnosed can be managed through extraction or through root canal therapy. Since it is difficult to diagnose concrescence in the first place, the clinician may often encounter an diagnose the condition after or during the extraction procedure. In cases when one tooth is normal and the other is severely decayed, root canal therapy of the affected tooth might need to be carried out. However, while cleaning, shaping and disinfecting the canals, the dentist needs to ensure that no harm is done to the roots of the healthy tooth.

Extraction of the teeth in concrescence can be highly challenging. Since the condition is more common in the upper arch, the extractions need to be carried out with immense caution, so as not to harm the maxillary sinus or the maxillary tuberosity in the process. The extraction space is larger than usual, and hence sutures are necessary in such cases. Patients are also advised an analgesic and antibiotic regime, followed by regular follow-ups to monitor the healing of the treated area.

If the dentist is able to diagnose the condition through a radiograph, then the first thing to do is to inform the patient and explain him or her the condition. The treatment plan should be such, that if possible, sectioning of the teeth in concrescence resolves the condition. If the concrescence is more severe, only then should root canal therapies or extractions be considered.