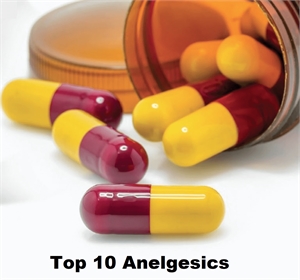 Toothache is the second most naturally occurring pain that a human witnesses after labour pain experienced during pregnancy. It is one of the most uncomfortable sensations that can elicit pain that can be sharp, dull, acute, chronic, etc. In addition, the connections between the nerves connecting the tooth and the brain follow a long tract involving parts of the brain and the spinal cord.

It is important to note that dental pain does not necessarily mean toothache. Pain in the dental region is not restricted to the teeth. It can also involve the bone that receives the tooth in the socket, the gingiva, the inner mucosa, etc. In order to relieve a person of dental pain, the medications that are given target the pain tract that is associated with it. Different drugs have different mechanisms that can target different sites in that particular pain pathway.

Analgesia is a Greek word that is derived from two words, 'an' meaning 'not' and 'algein' meaning 'feeling pain.' Thus, the most common medications prescribed in order to relieve a dental pain are called 'Analgesics.' The ten most commonly prescribed analgesics are:

Ibuprofen is a drug that works by deactivating an enzyme in the body named cyclooxygenase (COX) that is responsible for producing molecules that cause the sensation of pain. This drug is used for relieving toothache, fever, menstrual pain, minor injury, etc. A person with a history of heart, kidney or liver disease must inform the dentist regarding the same as ibuprofen might have an adverse reaction on the body in such patients. Women in their final trimester should not take this drug. Adults can take this drug in a dosage of 200-400 mg at intervals of 4-6 hours depending on the severity of pain. Children between 6 months T 12 years of age should be given a dosage between 5-10 mg. Advil, Midol, Motrin, Pediacare are the brand names under which this drug is available.

Aspirin is another drug which can relieve toothache. This drug has various effects like relieving pain, fever, prevention of clotting, reducing inflammation, etc. It can also be used in prevention of some heart conditions. It works in more than one way within the body but mainly includes deactivating COX irreversibly. Some people might feel an irritation in the stomach or small intestine after taking aspirin. Adults are usually prescribed a dose of 300-650 mg at intervals of 4 to 6 hours depending on the pain severity. Children should avoid this drug if possible as it might cause a condition called Reyes Syndrome that involves brain and liver. Aspicor, Bayer Plus, Ecotrin are some brand names for the drug.

Paracetamol or Acetaminophen is a drug that helps in relieving pain, fever, muscle aches and toothaches. It is a drug that blocks COX and relieves pain but at the same time does not reduce inflammation. If the pain is severe, this drug can be used with opioid containing drugs. An overdose of this drug can have a severely harmful effect on the liver and might also be fatal. This drug is present in various forms and is prescribed based on the patient's weight. It can also be available in capsule forms. Adults should not take more than 4g of this drug per day whereas children between 0-12 years are given 40-480 mg every 4 hours depending on the pain severity. Tylenol, Calpol, Panadol are famous brand names under which paracetamol is available.


Ketoprofen works similar Ibuprofen. Originally developed for arthritis, this drug can also be used in toothache, fever and menstrual cramps. However, this drug might not act faster than ibuprofen. It should be avoided by patients with asthma or any other conditions associated with heart, kidney and lungs. 25-50 mg of drug is prescribed every 6-8 hours as adult dosage. It is available under the brand name Oruvail, Orudis, Actron.


Naproxen also works by inhibiting COX and works in many inflammatory conditions like toothache, arthritis, knee pain, tendinitis, etc. Patients with cardiac conditions should consult a doctor before consuming this drug. It is available in both tablet and capsule forms. Adults and Children are recommended to take this drug at a dosage of 550 mg and 220 mg respectively at an interval of 8-12 hours. Aleve, Naprosyn, Naprelan are a few brand names under which Naproxen is available.


Diclofenac works in two ways. Not only does it inhibit COX, but it also kills the DNA of the bacteria responsible for any harmful activity. Certain channels in the body responsible for the sensation of pain are mediated by sodium and potassium channels. Diclofenac's pain relieving effect can also occur by its actions which block these channels. It is a non-steroidal drug, just like the ones explained above. It can be used in suppressing fever, pain, migraine and inflammation. Available under the brand names like Cambia, Cataflam, Zipsor, in cases of dental pain, this drug is prescribed at a dosage of 50 mg, thrice a day.


Celecoxib is yet another COX inhibitor which also helps in the same fashion like the drugs mentioned above. Similar precautions need to be followed before opting for Celecoxib. It is important o note that for toothache, this drug should not be prescribed to children. The usual adult dosage is 200 mg twice a day.

Unlike the drugs mentioned above, Tramadol is a narcotic pain reliever. People who are prone to addiction should avoid this drug. It relieves pain by acting on receptors of opioid, serotonin and a few other metabolites. This drug should not be taken in pregnancy. A major side effect of this drug are seizures. Tramadol is only given to patients above the age of 17 years. The usual dosage is between 50-100 mg, at an interval of 4-6 hours. Ultram and Zytram are some of the brand names under which it is available.


Codeine is another narcotic pain reliever that acts directly on the central nervous system. It is often given with non-steroidal drugs like paracetamol and aspirin. People with respiratory and gastrointestinal problems should not take this drug. It is not prescribed to individuals below the age of 18 years. Codeine is usually prescribed not more than 360 mg in 24 hours.


This is a gel based medication consisting of two drugs: choline salicylate and lidocaine. While one has an anesthetic effect, the other has a pain relieving effect. Dental pain caused due to mouth ulcers can be relieved by this gel.