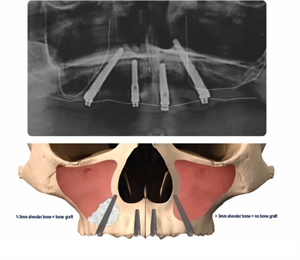 Dental implants are advanced systems that help in retaining the lost natural teeth. They are able to house a crown, bridge or denture depending on the total teeth lost. However, in order to ensure the success of a dental implant procedure, it is important that the implant itself locks inside the bone to ensure stability and support. Implants can be of different types depending on their design and in the area where they are supposed to be placed.

In the upper jaw (maxilla), the bone length can decrease if there is an early loss of teeth. Once the bone resorbs and becomes thin, it becomes difficult for the placement of implant. It becomes further complicated as the maxillary sinus lies close to the roots of the back teeth. This sinus plays a key role voice modulation, lighten the skull, moisturize the inner linings of the nasal cavity, regulate the inner temperature of the skull, etc. A conventional implant cannot be placed inside the sinus as it leads to many complications. Hence, in such a case, adjunctive surgical techniques like sinus lift and bone grafting need to be carried out before placing the implant.

A sinus lift is a procedure where the lining of the sinus is exposed, and moved above. The void formed between the sinus and the bone is filled with a graft material. A graft material mimics the lost tissue. Once the graft is placed and till the bone regenerates, an implant procedure cannot be carried out. After six months, the bone is formed and the sinus is also fixed in its raised position. Thus, the bone height increases.

"Trans" means across or beyond. The implant is now placed in the newly formed bone. Since it traverses the area previously occupied by the sinus, it is called a trans sinus implant. Trans sinus implants unlike conventional implants can be placed directly in the implants. However, these implants are tilted at a certain angulation, such that the implant goes through the sinus and takes the support of the nasal (nose) bone. Dental surgeons usually recommend a bone grafting and sinus lift if the height of the bone is less than 3 mm. However, if the bone height is more than 3 mm, than these additional procedures can be avoided. Depending on this thickness, the surgeon also decides on the number of the implants that need to be placed.

Before the placement of a trans sinus dental implants, the patient is kept on an antibiotic regime of amoxicillin and clavulanic acid 1 hour before the surgery. The procedure commences when the dental surgeon anesthetises the region where the implant has to be placed. Since the implant is supposed to be fixed and lodged in the bone, the overlying soft tissues (like the gingiva) need to be raised. This can be imagined as a flap like structure that helps in exposing the bone. The bone now needs to be drilled at an angulation such that the walls of the sinus and nasal bone are involved. The implant is placed in this bone and later the flap is sutured back.