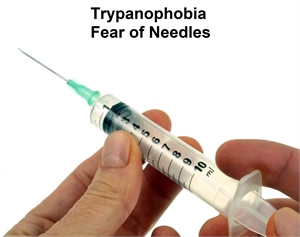 The moment people come to know that they need to visit the dentist, two things come to their mind - the dental drill and the injection. These two objects can shoot a sense of fear in a person's mind and resist him or her from visiting the dentist. But a dental pain is even more unbearable and a visit to the dentist is thus inevitable. The fear of the needle can aggravate even more when the patient actually sits on the dental chair. This fear can increase to the extent that a patient might start to sway away from his or her normal self. This fear of needles is called trypanophobia, a phobia that was officially recognized as a condition in 1994.

Before we discuss in detail about the fear of needles, it is important to clearly differentiate between trypanophobia, belonephobia and aichmophobia. Aichmophobia refers to the fear of any pointed object. This fear is not restricted simply to a needle. Belonephobia on the other hand is specifically called the fear of needles since the word "belone" means needle in Greek. Enetophobia is a synonym of belonephobia. Trypanophobia on the other hand is derived from the word ‘trypano’ which means auger in Greek. An auger refers to a device that is used to drill a hole. An injection performs a same function but there are many devices with which one can drill a hole. However, it is now commonly included under the umbrella of the phrase "fear of needles." Thus, for the purpose of this article, even though debatable, we would refer to fear of needles as trypanophobia.

The moment you are seated in a chair and come to know that your dental procedure involves administering an injection, the nervous system starts to release chemicals that instigate the sense of fear in you. This can occur only if you have had a previous bad experience with an injection needle, have heard painful stories of the needle injection or have a generalized anxiety. Please keep in mind that the fear of needles is not restricted to a dental visit. In this article, we are simply understanding trypanophobia by keeping a dental visit as a reference.

The fear of needle can be so intense that it can trigger not simply by the actual sight of the needle but also by visualising it or by feeling objects that are as pointed as needles. As mentioned earlier, the nervous system gets activated first. The fight or flight response begins. This leads to an increase in the heart rate and the blood pressure. Once the needle is brought closer or injected, the heart rate and blood pressure drop rapidly. This abrupt drop can cause nausea, ringing in the ears, change in body temperature and might cause convulsions. The patient approaches the state of fainting, also known as syncope. This is the most common pathway of a needle phobic attack. It is known as vasovagal needle phobia.

A major portion of trypanophobia is psychic in nature. In case an individual has seen a close one being administered with a needle injection that was followed by a painful surgical procedure, the individual might feel psychologically disturbed and the image of the needle would fixate as a satanic entity in his or her head. If the same individual is now scheduled for a procedure involving needles, the time period before that the procedure, he or she can have sleepless nights, get panick attacks and increased anxiety. This too is a form of trypanophobia known as associative needle phobia.

Children are the most common candidates of needle phobia. However, apart from vasovagal and associative forms, another variant can be prevalent in them. This form arises due to improper upbringing, where the child is physically abused, restrained or emotionally tortured. Even if the child has not seen a needle previously, the very thought of an object coming in close proximity to him or her can cause his behaviour to be combative. There is an abnormal increase in heart rate and blood pressure and the patient becomes difficult to handle. This is called resistive needle phobia.

There are individuals who have a high sensitivity to pain. The perception of pain in these individuals is not only due to a needle penetration but can be a result of any other trigger. But when it does happen due to a needle, the patient will develop an unexplained anxiety before the penetration of the needle. This is called hyperalgesic needle phobia.

The final type of trypanophobia is when an individual faints and collapses upon seeing someone else getting injected with a needle. This is called vicarious needle phobia.

It is often stated by researchers that trypanophobia can have genetic basis. It is possible that an individual inherits those genes responsible for carrying the information of trypanophobia from his or her parents. This causative factor also explains the psychic nature behind trypanophobia where individuals not previously exposed to a needle develop the symptoms of needle phobia.

There is no specific treatment of trypanophobia. A healthcare practitioner can relieve the symptoms but can only rarely takeaway the phobic sensation. There are ways in which the site of the injection can be conditioned before the injection is introduced. This can involve cooling the site with a spray, applying an anesthetic agent in that particular region, prescribing certain analgesics before the procedure, or using modified injections who deliver the medication faster than normal or injections that generate vibrations at the site which reduces pain sensation.

The more important treatment aspects include managing the behavior and regulating the blood pressure and heard rate. Behavior therapy can include psychotherapies where a patient is made to calm down and given motivation to fight against the phobia. However, the effectiveness of these methods vary from person to person. High blood pressure and pulse rate can be controlled by medicines known as beta-blockers. These medications help in regulating the abnormal rhythm of the heart and thereby aid in reduction of anxiety.

Trypanophobia is a psychological disorder that can often interfere in medical procedures. It is a test for the healthcare practitioner to ensure that the operative stage is carried out smoothly in such individuals by the needed distractive or pharmacological interventions.