What are Bicortical dental implants or Basal implants 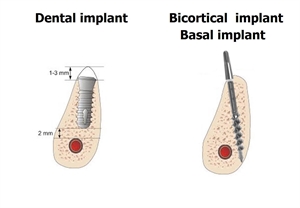 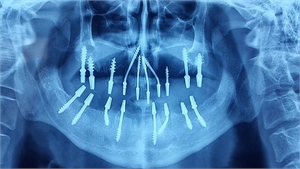 The human teeth are placed in sockets of jaw bones. These sockets are bony structures that are layered at multiple levels. The bony structure responsible for keeping the teeth fixated is called the alveolar bone. Implantology is a field in dentistry that was introduced in the 1970s. These dental implants were the last option for replacing lost tooth or teeth. Dental implants that were initially introduced, took the support of alveolar bone. The alveolar bone gets debilitated faster once the natural tooth or teeth are lost. When implants are placed in this region, it takes months for the bone to interlock with the dental implant.

It was in the early 21st century when implantology took a step further. The bony area under the alveolar bone is called the basal bone. This is the bone that is present throughout our skeleton and bears all the stress exerted on the body both internally and externally. Since it has a dense structure consisting of two cortical plates the region is tagged as bicortical. Dental implants along with the tooth structure were then aimed at being placed in the basal bone. The resulting implant was much sturdier. Further advancements in material technology gave rise to two types of basal implants: Basal Osseo Integrated (BOI) or Lateral Basal Implants and Basal Compression Screw (BCS).

The BOI implants are placed after incising certain areas of the jaw under local anesthesia. The implants are then placed from the sides and inserted deep into the basal bone. The BCS implants on the other hand do not require any incisions. They can be inserted through the gingival tissue just like conventional implants.

The advantages of these implants are that they have a polished surface that does not allow the bacteria and debris to attach to. This reduces the chances of inflammation around the implant (peri-implantitis). Moreover, these implants are a single entity unlike conventional implants that have separate components that mimic the tooth's crown (abutment) and root (implant). The thinner bodies of these implants and the wider screws allow faster formation of blood vessels around the tooth. Finally, these implants have a flexible neck which allows them to be moved 15 to 25 degrees in the desired direction.

The placement and fixation of these implants in the bicortical area in both vertical and horizontal directions ensure their stability. They are thus recommended for use in patients who have lost multiple teeth, have a reduced jaw bone height or width and in those where conventional implants have failed. The reduction is jaw bone height and width can be due to prolonged use of dentured, improper oral hygiene maintenance and any traumatic injury.

Bicortical implantology is advantageous as it can be carried out even in medically compromised patients like diabetics and chronic smokers. However, they are contraindicated in cases where a patient has recently suffered from a heart attack, is immunocompromised or is put on drugs for cancer or vascular conditions. Patients with a deformity in muscles responsible for mastication should not opt for bicortical implants.

The biggest challenge after placing implants in the bicortical area is the distribution of masticatory forces. If these forces are not neutralized by the implants, then the bone surrounding the implants can develop microcracks which take time to be filled again through the body's remineralization process. This condition is thus called functional overload osteolysis (destruction of bone due to high forces exerted through chewing).

Bicortical implants are a cost-effective and quality choice for replacing lost teeth. Apart from the fact that they can be placed in both the extraction and healed sockets, they are highly resistant to bone resorption unlike the alveolar bone. Another advantage of these implants is that they can be placed within 72 hours. This time is significantly lesser as conventional implants take 6 months to 1 year to stabilize and heal. Moreover, the number of instruments needed in the surgical process is minimal while opting for basal implants.

The T-shaped basal implants that engage the bicortical area are a major breakthrough in dentistry. The minimalist ideas of treatment attached to these implants have made them a desirable option for both the dentists (prosthodontists and oral & maxillofacial surgeons) and patients.