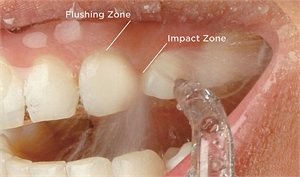 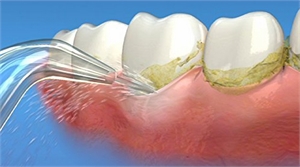 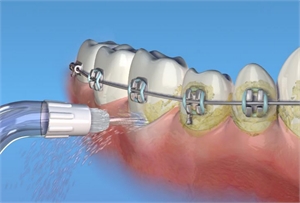 It is a somewhat surprising fact that many dental patients have not heard of a waterpick, or if they have, they have no idea of what it does.

A waterpick, also known as oral irrigator or water flosser, is a tool for flossing your teeth and gums using a jet of water, rather than conventional string floss. It has several advantages over conventional floss and some studies show that it produces better results in the removal of plaque and reduction of bleeding gums, resulting in overall better oral health.

Poor oral health and pathological gum conditions, such as gingivitis and periodontitis, are associated with other diseases, including Alzheimer’s, arthritis, diabetes, heart disease, and cancer. Furthermore, dentists report that patients who have a waterpick are far more likely to floss their teeth and gums regularly than those who rely on string floss.

Several manufacturers make waterpicks, including Phillips and Panasonic. They are usually battery operated, hand held devices (although there are mains operated versions) similar to an electric toothbrush, but with the addition of a water tank. Some models have a separate water tank which connects to the hand held unit with a small hose. Most models deliver a jet of water at two different pressures, and some use a pulsing motion delivering the water in rapid bursts.

The head, which delivers the jet of water, can usually be moved through 360° in order to reach any part of the mouth easily. In order to operate the waterpick, it is simply a case of switching it on and placing the orthodontic tip close to the teeth and gums. The head needs to be over a basin in order to let the water run away. The water jet will get to places that cannot be reached by a toothbrush or string floss.

Water flossing is claimed to be easier and faster than using conventional floss, one manufacturer stating that it requires only one minute per day. Water flossing is said to be far more effective for patients with dental braces or dental implants. It has been stated that water flossing dental braces and orthodontic appliances is up to three times as effective as traditional flossing. It can clean below the gum line, and studies have shown that it will remove up to 99% of the plaque. It also removes food particles and other debris that string floss or tooth brushes cannot reach.

Are there any disadvantages?

One or two users report that a model with an on/off slide switch can be difficult to use with wet hands; a push button switch would be easier.

The other complaint with the battery operated models seems to be that they need fairly frequent recharging. With one manufacturer in particular, it is claimed that the batteries do not last very long, in one case as little as two weeks.

What do I choose - interdental brushes, water flosser or conventional floss?

What is the difference between water pick and Waterpik?

Water pick is the broad term for an oral irrigator, also known as water flosser. The device is used to flush out debris from the interdental spaces and gaps between the teeth. On the other side you can see the word spelled as 'Waterpik'. This is actually a trade mark owned by Water Pik Inc. previously known as Aqua Tec Corp. In 1962, the company was founded in Fort Collins, Colorado by the hydraulic engineer John Mattingly and the dentist Gerald Moyer. In a nutshell, water pick is an oral irrigator and Waterpik is a reserved trade mark - Waterpik® producing dental hygiene equipment.