What is AP spread in dentistry? 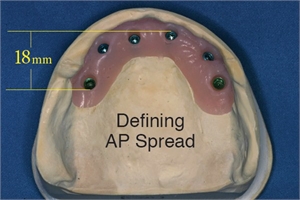 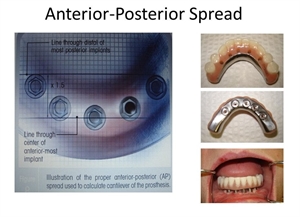 Anterior means the front region. Posterior means the back region. Anteroposterior refers to the total length combining the front and back region. The word "region" here refers to the upper or the lower jaw arches where the implant-supported prosthesis are placed. These implants however are placed relatively in the anterior regions. If a functional force of chewing or biting is applied, there is a good chance that the teeth placed posterior to the implants are likely to disturb the integrity of the prosthesis. However, this is avoided by measuring an entity called the "Anteroposterior (AP) spread."

The AP spread tells us how much area should be available before the implant in order to assure that the load distribution is equal when a frce is applied on the prosthesis. It is calculated by passing a line that travels through the center of the two most forwardly placed implants on either side of the arch. This shall be our Line A. Next, a tangent is passed behind the most backwardly placed implants. This is our Line B. The distance between Line A and Line B is the AP spread. The story does not end here.

The result of our AP spread calculation is further multiplied by 2. This result gives a value in millimetres which tells us about how much cantilever we can give. Cantilever in implant dentistry refers to the teeth that do not have support of their own and are connected to another teeth with a better strength and resistance. As stated before, implants are usually placed in the anterior and middle of the arch. But what about the teeth in the posterior region? The area across which the posterior teeth should be placed is what we got by the formula (2xAP). The teeth placed in these areas are called cantilevers.

It is important to note that the anteroposterior spread is not same for each patient. It depends on the shape and size of the arch. For example, a patient with an ovoid arch shape has an AP spread between 6-8 mm, between 2-5 mm in square arches and more than 8 mm in tapered arch form. This means that tapered arch form has the highest potential of accommodating more cantilever.

A dentist measures the anteroposterior spread by first taking an impression of the concerned upper or lower arch. The implants are positioned on a cast that is fabricated with the help of the impression. The measurements are later done either manually or digitally. Once we get to know the total cantilever that can be given, the entire prosthesis is then fabricated. The patient is then recalled to receive the prosthesis.

The dentist will always check that the given implant-supported prosthesis intercuspated into a nice bite with the teeth of the opposing arch. The patient is also asked to chew in order to ensure that the prosthesis is sturdy enough and can distribute the forces equally. A greater AP spread means that the load on the entire implant system will be lesser.

AP spread aims to neutralize the forces on the implants and the cantilever. However, in certain special cases, the AP spread is entirely dependent on the clinician's expertise. These cases are the ones involving patients under a lot of stress, patients who have a habit of clenching their teeth at night (bruxism) or in patients who have a denture in the opposing arch. In these cases the amount of forces received by the implant system varies and hence the manipulations are done accordingly.

AP spread is a mathematical and biological concept. Even though it can be too technical for the patient to understand, the AP spread concept can give them a vague idea of how their prosthetic teeth are going to bear the brunt of forces.