What is bundle bone? 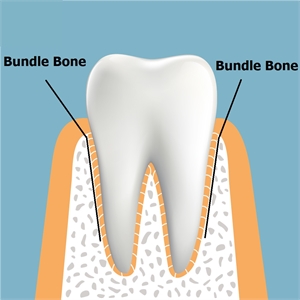 The teeth in our mouth are embedded in sockets that are present in the jaws. These sockets receive the roots of the teeth. The roots stabilize themselves in the socket with the help of a group of tissues that is known as the periodontium. The periodontium is made of four principle tissues. Firstly, there is the gingiva or the gums that brace the tooth's roots. Next we have the cementum which is a sturdy covering layer for the roots of the teeth. The periodontal ligament comes in next, which connects the teeth and the underlying bone. Finally, we have the alveolar bone which receives the tooth in the socket.

The teeth are firm in their position because of the fibres in the gingiva and periodontal ligament that traverse throughout the arch. Some of these fibers are embedded in the underlying bone too. The alveolar bone forms the socket lining. This socket lining receives fibers from the periodontal ligament and cementum. These fibers are attached to the part of the alveolar bone called the bundle bone. This is because this bone receives fibres in bundles. These fibres are called Sharpey's fibers.

When a tooth is extracted, the Sharpey's fibers are also lost in the process. This means that the bundle bone that attaches these fibers will resorb over time. The loss of this bone means that there will be a decrease in the vertical height of the bone in that region. The loss of bundle bone is more on the facial aspect of the bone compared to the lingual (towards the tongue) aspect of the bone. Moreover, there will be a lack of supply of blood vessels and nerves once this bone resorbs.

The bundle bone is also a great diagnostic aid. On a dental radiograph it appears as a thin white line that is present between the tooth and the bone. This white area is called the lamina dura and it represents the bundle bone. Widening of this area can be indicative of a mobile tooth, an infected tooth or a bone pathology.

Bundle bone's thickness can range from 0.2 mm to 1 mm. This bone is the first to get depleted following the loss of the corresponding tooth. It is also the first to get replaced by another bone called the woven bone. The woven bone tries to compensate for the lost bundle bone, thereby trying to preserve the height of the bony structure. The height of the bone will be reduced compared to its original height irrespective of the woven bone formation. The remodeling of this bone will then continue as a physiological mechanism. It is often argued that the cells for the new bone formation is obtained from the bundle bone. However, this claim is often challenged.

Bundle bone has a crucial role to play during implant placements as well. Bundle bone need to be preserved during immediate implant placement as this bone is responsible for the blood supply in that area. However, the resorption of bundle bone will still take place even after implant placement. This can cause negative cosmetic effects. So to counter this, grafting procedures can be carried out.

Bundle bone is one of the most important components of the alveolar bone. Being a lining of the tooth socket and house to Sharpey's fibers, the bundle bone plays a vital role in acting as the stress bearing element and maintains proper health of the tooth and its surrounding bone through blood supply obtained through the periodontium.