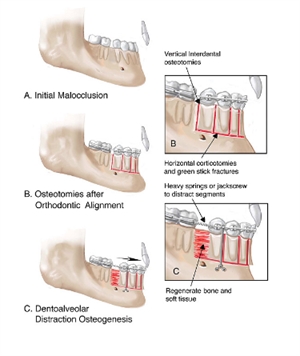 Dental treatments can often be extensive when the degree of deformity is too high. Such abnormalities can be because of maligned teeth, which in their improper positions can lead to disharmony in functions like speech and mastication. The movement of teeth in their desired positions can help in correcting these dental problems.

Teeth are in their respected positions because of certain ligaments, bones and the gums that surround them. In order to move a tooth, a certain force is applied whose effect should be exerted on the underlying bone. This force is called an orthodontic force. This force needs to be controlled and is delivered through braces or certain appliances. The movement of teeth is slower in these cases. However, in cases where teeth movement needs to be faster than normal, the underlying bone needs to be cut surgically. This particular bone is called the cortical bone and the procedure that involves cutting it in order to facilitate tooth movement is called corticotomy.

Firstly, local anesthesia is administered to numb the region of interest. Next, the gums are incised, and a flap-like tissue is raised to see the underlying structures. This flap is incised such that reattachment at the end of the surgery is easy. Further dissection reveals the alveolar bone.

The cutting of cortical bone is called decortication. It creates an intentional injury on the bone leaving intact periosteum to facilitate faster healing. The surgeon ensures that no nerves or blood vessels are harmed in this area. The thinning of the cortical bone is done in both vertical and horizontal directions. These cuts are made at a sufficient distance away from the roots of the teeth. As a result of these cuts, a block-like structure is made. This block contains only the teeth that need to be moved.

The cutting of the bone leads to inflammatory changes in that region. The entire metabolism of the bone changes in that area. A pressure and tension zone is created which causes losing of certain mineralized tissues from that area. After a certain period of time, the altered position of the bone begins to remineralize. Since the bone itself moves, so does the tooth or the teeth. The involvement of orthodontic wires and braces can further facilitate the movement of the teeth.

Corticotomy ends when the flaps are sutured back. These sutures are removed only after two weeks. The desired teeth movement take place within 4-6 months. However, this time frame may vary based on the patient's overall health status. In order to avoid any post-operative swelling and infection, patients are prescribed analgesics and antibiotics. After every three months the patient is recalled for a follow-up.

Modern techniques have made corticotomy less invasive and faster. Laser assisted corticotomy, decortication through piezoelectric devices and through handheld devices that do not require elevation of the flap are the recent headways in corticotomies. Moreover, bone grafting has now become relatively common following a corticotomy.

Corticotomy involves faster movement of teeth and thereby speedier completion of the patient's treatment. It can improve a patient's profile with minimal chances of relapse. Even though it is an invasive and expensive procedure, corticotomy can resolve multiple issues related to the periodontium (group of tissues that support the teeth) in one surgical intervention.

Patients who are on long term steroid therapies, radiation therapies, compromised immunity and with inadequate bone and surrounding tissues should not opt for corticotomy. This is because complications can arise with respect to resolution of bone loss, healing of soft tissues and adverse drug interactions.

Corticotomy is a solution for both dental and skeletal conditions. A range of issues like crowding of front teeth, improper bite, impacted teeth, poor arch form, etc can be corrected through corticotomy. However, the greatest advantage lies in the stability following this procedure which assures its long-term success.