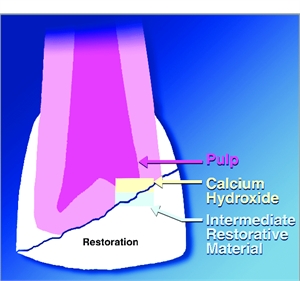 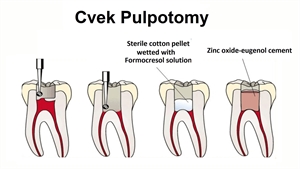 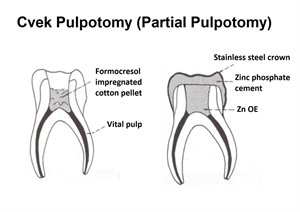 The pulp is present below the enamel and the dentin, which are two hard tissue layers of the tooth. The pulp is spread across the crown of the tooth and extends as narrow canals in each of the roots. These are the so called root canals. The part of the pulp in the crown is called the coronal pulp. The part of the pulp in the roots is called the radicular pulp.

Now that we have picturised the pulp in our mind, it appears to be safely governed from all sides. Above it are two hard layers of enamel and dentin, below it is surrounded by the root, which in turn is layered by a hard tissue layer called the cementum. Despite such a tight security around it, the pulp can get frequently infected. The source of this infection can be an underlying disease, dietary habits or I'll-regulation of oral health.

In most cases, the attack on the tooth begins from the chewing surface. The microbes eat up the enamel and create an acidic environment that further degrades it. A range of microbes acts on this tooth and enter the dentin. The dentin too faces the brunt of the microbial invasion and eventually exposes the pulp. When the pulp gets exposed, an individual is likely to get a sensation of pain since the nerves are present here. If this pain and exposure is ignored, the pulp gets infected right till its roots. The most severe cases would manifest as a cyst or a tumour at the end of the root tips and result in eventual swelling. This entire chain reaction can be avoided if the patient gets his tooth checked the moment any discomfort is felt. Dentists check the depth of the infection through means of x-rays.

One of the most challenging aspects for a dentist is to protect the tooth when the infection has just entered the pulp. However, it is very difficult to determine how much it might have actually spread across the pulpal tissue. This is the reason why most dentists even today opt for a complete removal of the pulpal tissue, cleaning the canals and eventually filling it with a biocompatible material. This procedure is called root canal treatment. However, in 1978, two researchers proposed a new technique.

Miomir Cvek and Ingegerd Mejare introduced a form of pulp modifying procedure where a major portion of the pulp remained intact and only the infected portion was removed. Furthermore, the important aspect of this procedure was that it was carried out in permanent teeth that had just erupted and whose roots were still developing. This procedure was named Cvek Pulpotomy.

Pulpotomy itself means to remove the infected portion of the pulp, replace it with a suitable material and leave the remaining healthy pulpal tissue intact and functional. Cvek's pulpotomy does the same but as mentioned previously, it is carried out only in young permanent teeth. This tooth could have been victim of a traumatic event or a bacterial attack that resulted in an infection deep enough to touch the pulp. Since it is a permanent tooth, it becomes all the more important to save it.

If a dentist sees a young tooth with deep decay in it, he or she will investigate the innards of the tooth through an x-ray. This will also help in determining the extent of the decay and the amount of completion root formation. If the roots are still developing and the infection has just touched the pulp, a Cvek's pulpotomy can be carried out.

The dentist will anaesthetise the tooth first. Next, with the help of an instrument known as the "spoon excavator," the dentist will remove all the decay. Dentists might even use a bur fitted in a drill that rotates at a slow speed for the removal of the decay. When this process reaches the part of the pulp that is infected, blood from the pulp will begin to ooze out. Once this oozing stops, a layer of calcium hydroxide is applied in that region. This helps in the prevention of a clot formation within the pulp. The dentist will then place a temporary material that covers the tooth. Later, in the next visit, the dentist will remove the temporary material. A new x-ray will be taken to see if there are no further signs of infection and inflammation. Once assured, materials like zinc oxide eugenol and glass ionomer cement are used to seal the area where the pulpal tissue was removed. The procedure ends after the dentist gives a permanent restoration that restructures the tooth.

Cvek's pulpotomy thus acts as a life-saving procedure for a young permanent tooth that is attacked by microbes at a time when it has just found its way in the oral cavity.