What is Ferrule in Dentistry? 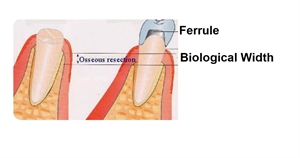 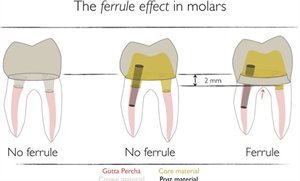 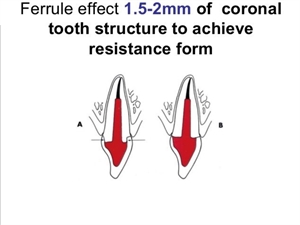 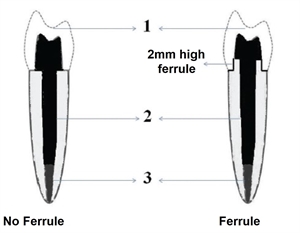 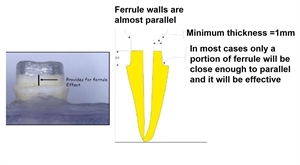 Let us first understand it in the terminology it is more known for. A ferrule is a ring at the end of a metal pipe that provides a sturdiness to the pipe joint. In other words, it prevents the pipes from splitting and holds them together.

In dentistry, ferrule is a term that is referred to a circular band of tooth structures, left after crown preparation, in order to support and stabilize the overlying dental crown. Following a root canal procedure, a crown is usually given to protect the tooth and aid it in its function. However, the fitting of a crown becomes tricky, when endodontic treatments rob the tooth from a lot of its actual structure. In such cases, in order to reinforce the crown to the tooth, a ferrule is prepared.

The type of the tooth involved, the total structure of the tooth remaining and the distance of the visible tooth from its underlying bone decide the ferrule preparation. Moreover, a ferrule becomes absolutely necessary when the tooth is at a great risk of fracture because of the internal anatomy of its roots.

When a tooth is devoid of a major amount of its structure, components like a post and core are fabricated. A core makes up for the coronal portion of the tooth whereas a post takes the shape of the root canal and supports the core. In order to protect the treated tooth from any sort of fracture, the crown is placed in a manner that is entirely dependent on how it is received by the ferrule preparation.

Tooth ferrule is formed by the core material and healthy tooth structures - mostly consisting of dentine. It is not necessary that all the tooth walls need to be present for the preparation of a ferrule. If a tooth wall is absent, it indeed keeps the tooth at a greater risk of fracture, but a ferrule setup can still be done. The best ferrule consists of plenty of helthy dentin, thick enough to support strong occlusal forces and is higher than than the minimum of 2mm.

It is necessary to first observe the total distance of the tooth till the bone in which the tooth is embedded. If this distance, known as the biological width, is less than 2.5mm, a ferrule cannot be made. This is because preparation of ferrule in such cases might cause the crown to impinge and harm the internal surrounding structures of the tooth.

In cases where the biological width is less than required, treatment procedures like crown lengthening and forced extrusion of the tooth by orthodontic means might be carried out. These treatments help in exposing sound tooth structure which can bring about the needed crown-root ratio for ferrule preparation. However, in doing these adjunct treatments, a lot of interdental lining is lost, adding to esthetic concerns and at times, a loss of support to the adjacent teeth.

A ferrule setup looks like a little step which is 1.5-2 mm long and surrounds the walls of the dentin. These walls are parallel to each other. Even when parallel, care should be taken that they are in sync with the morphology of the tooth.

The ferrule effect is one of the most important concepts in the restoration of teeth that have undergone root canal treatment. This effect sees the ferrule reinforce the tooth and increase its strength. Moreover, forces acting on the tooth either vertically or horizontally puts the ferrule to test. An ideal ferrule preparation would not only resist these external forces, but would also help in distributing them. Furthermore, a ferrule also protects the tooth from the internal forces that might be asserted by the post. The ferrule effect can fail if dimensional errors in comparison with the post material selected does not match. If the tooth root fractures due to such an error, then it cannot be repaired. A crown preparation with ferrule adds longevity to redundant tooth's life that has undergone endodontic treatment.