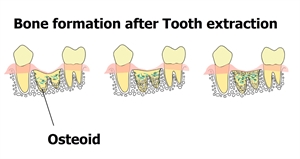 The bones in the body are constantly in a dynamic state. A major role in the development and growth of a human is played by the skeletal system. The bones in our body constantly remodel themselves in order to maintain the consistency of growth and development. These changes can be as compensatory or defensive in nature. Let us understand the meaning behind this.

The regulation of a bone's integrity is done by two main types of cells: osteoblasts and osteoclasts. The osteoblasts are the bone-forming cells whereas the osteoclasts are the bone destroying cells. Both these cells work together in a typical order. The bone remodelling is activated when there is a change in the hormonal regulation, normal growth, biomechanical reasons, injury, trauma, etc. Thus, to compensate for these changes, there is a need to remove the old bone and replace it with a new one. This is done by the osteoblasts and osteoclasts in certain phases.

The osteoblasts then begin their activity by secreting a component of the bone matrix called the osteoid. Osteoid means resembling a bone. The osteoid resembles the actual bone but is not exactly like it. Once secreted by the osteoblasts, the osteoid begin to harden (calcify) in the next 24 hours. 60% of the osteoid gets mineralized by this time. In the process of calcification, the osteoid also paves a way for the new blood vessels. The osteoclasts, which were present in minimal amounts now exit from the site. The osteoblasts are converted to osteocytes (bone cells).

The entire process of bone remodelling is completed when the osteoid calcifies completely. The time an osteoid takes to calcify and the region where it calcifies directly affects the structure and integrity of the newly formed bone. So how is osteoid important in dentistry?

The teeth are fixated in sockets that are present in the upper jaw and lower jaw bones. A severely decayed or fractured tooth might be indicated for extraction. Once the tooth is removed from it's socket, a significant portion of the bony socket is also hindered. The ligament that served as the attachment between the socket and the tooth also gets severed. In order to repair and heal this socket, a defensive mechanism of the body is triggered. This is none other than the bony remodelling.

The removal of the tooth leads to the destruction of many blood vessels. As a result, blood leaks out and fills the extraction socket. The bleeding is stopped by external pressure with a cotton. The blood in the socket begins to clot. The resulting clot traps the broken blood vessels and begins to contract. After one week, the clot begins to harden and becomes more organized. However, there is no presence of a bone-like tissue yet.

After two weeks, the initial signs of the bony remodelling can be seen. The remnants of the ligament are lost, the clot is much more stable and the osteoclasts reach the margins of the socket. In the third week, the new blood vessels grow in the clot. This is called granulation tissue.

During the third week, along side the granulation tissue, the osteoblasts reach the socket margins and deposit the osteoid. The lesser calcified osteoid and the granulation tissue thus ensure that wound caused by the extraction is now replaced with new cells. In the fourth week, the osteoblasts and osteoclasts continue to resorb and deposit new bone for the next 6 to 8 weeks. The osteoid keeps calcifying gradually during this time period. Once the osteoid calcifies, it becomes a part of the bone tissue.

Osteoid can be imagined like a foundational pillar of the new bony architecture. It is thus fundamental in the laying down of the new bone and the amount of its calcification determines the strength of the subsequent bone.