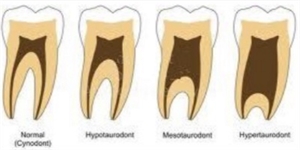 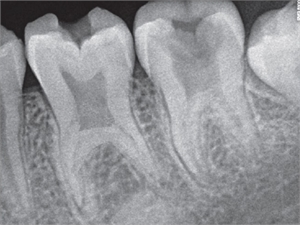 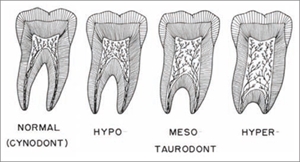 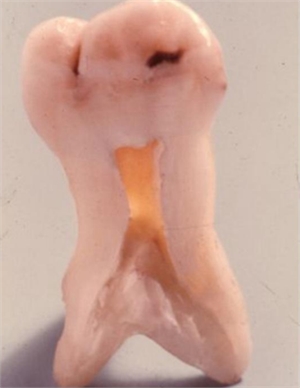 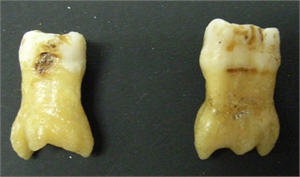 Taurodontism is a rare developmental abnormality in which the crown of the teeth is enlarged at the expense of the root. The word taurodontism comes from the Latin term tauros meaning bull and Greek term odus meaning tooth, bull tooth. It was introduced in 1913 by Sir Arthur Keith to describe molar teeth which resembled those of ungulates, particularly bulls. Taurodontism can usually be seen in multi-rooted teeth like molars and may occur either on its own or in combination with other syndromes. Clinically, a taurodont appears normal and there is no factor which distinguishes it from other teeth. The diagnosis is clinched on the basis of radiographic appearance wherein a rectangular shape of the pulp chamber is visible.

It is usually ascribed to the inability of the root forming tissues (Hertwig’s Epithelial Root Sheath) to invaginate at the appropriate horizontal position thereby leading to short roots which branch out at a lower level than normal, i.e., an apically placed furcation and a bulbous crown.

Failure of invagination may occur as a result of mutation in a particular gene or due to an X-linked, familial or an autosomal dominant trait.

It may also occur as a specialized retrograde character or an atavistic feature, i.e., an evolutionary throwback.

A taurodont appears similar to a normal tooth in the oral cavity and participates in normal function without causing any inconvenience to the patient. However, since it has an enlarged pulp chamber with decreased amount of hard tissue surrounding it, the invasion of dental caries has fewer barriers to cross in order to reach and infect the pulp and render it non-vital.

The diagnosis of a taurodont is confirmed by a radiograph in which an enlarged pulp chamber, lower pulpal floor and lack of constriction at the junction of cementum and enamel are seen.

Patients with taurodontism usually require no specific treatment. However, if a taurodont is dentally compromised, its treatment poses various difficulties due to its altered anatomy.

In cases where a taurodont undergoes an endodontic treatment, the complexity of its root canal system makes it tricky to completely obturate the canal using conventional techniques. Modified methods of obturation are used to pack the canal with optimum efficiency.

Since the roots of taurodonts are dilated, this makes extraction of such teeth difficult. However, it has been hypothesized that since the amount of teeth embedded in the jaw bones is less, extraction should be easier unless the roots are extremely divergent.

Taurodonts do not qualify as one of the most advantageous teeth when it comes to abutment (the teeth which support a partial denture) selection. This is because there is less amount of tooth structure in the bone and therefore decreased stability when compared to morpho-anatomically normal teeth.

On the other hand, the chances of periodontal disease of a taurodont are lowered. This is because the furcation area is shifted towards the apex of the roots and there are less chances of it getting involved with gingival recession or periodontal pocketing when compared to other multi-rooted teeth where less significant destruction also leads to furcation involvement.

Depending on the severity of the condition the teeth can be separated into several groups: