What is the difference between dental dehiscence and fenestration? 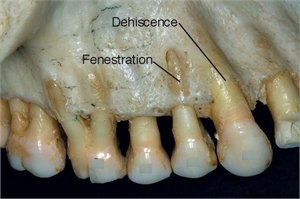 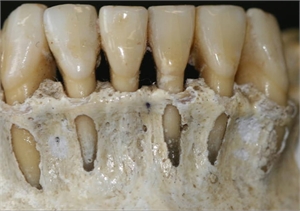 Human teeth are well protected in their bony socket due to the topography of the structures that surrounds it. The roots of the teeth are layered by the alveolar bone, the periodontal ligament and the gingiva. These structures play a major role in protecting the root and maintaining the functional integrity of the tooth.

But such a meticulously arranged apparatus might also be a victim of defects that can lead to a prominent "nakedness" of your tooth roots. The defects we will be focusing on are of two types: Dehiscence and Fenestration. Generally speaking, both these defects lead to the root surfaces getting exposed as the overlying bone gets denuded. However, a subtle difference differentiates these two defects. But let us consider both these bony anomalies individually.

The alveolar margin is the line that demarcates the part of the tooth you can see and the part that is covered by the gums. When root exposure begins from this margin till at least at depth of 4 mm, such a defect is called dehiscence. Dehiscence literally refers to splitting or peeling of an organ. These defects are commonly seen in the lower jaw. Moreover, in the lower jaw, it is more commonly seen in the region of the front teeth. This is because the thickness of the bone of the lower jaw (mandible) is greatest at the region of the back teeth and gradually decreases as we move towards the front teeth.

A fenestration on the other hand is by literature, an opening or a window in a building. One can relate this by imagining the tooth and the gums covering its root as one tall building. A fenestration develops when there is no defect seen on the alveolar margin but rather a window-like structure exposes the root surface at the middle or the lower third of the root. Fenestration are usually seen in the upper jaw bone (maxilla) somewhere between the first molar and the canines. This is because the bone at the region of premolars is narrower than the rest of the bone.

But what cause lies behind a defect so intense that it denudes a layered setting? The exact cause of these defects is still unknown. However, there are many possible explanations. Firstly, teeth positioned abnormally (ectopic) can exert abnormal pressure inside the bony socket causing an eventual defect in the alveolus. Secondly, often an abnormally growing root can exert a pressure on the bone if its growth does not take place in the proper direction. A root growing more towards the cheek can cause fenestration or dehiscence. Thirdly, certain attachments in the oral cavity guide the development of the soft tissues like tongue, lips and cheeks in relation with the surrounding bones. These are called frenum. An abnornal attachment of this frenum can force the root to get stripped off its bony cover. Fourthly, a few patient habits like consuming smokeless tobacco can often be the trigger for root exposure.

Fenestration and Dehiscence can also occur due to a dentist's negligence in a patient wearing braces or any appliance in order to correct the alignment of the teeth. These appliances exert their action at the level of the bone in order to cause tooth movement. The bone helps in this movement by constantly changing its architecture by depleting itself from one side while constantly rebuilding itself from the other end to maintain the pressure. However, if the force by the appliance exceeds enough to break this pressure regulating cycle of the bone, the blood vessels in that region are likely to rupture. This can lead to the gums being deprived of blood supply, making them vulnerable to wear and tear. Eventually the bone will become necrotic in the region, thereby exposing the roots of the corresponding tooth. Apart from braces, defects like dehiscence and fenestration can also develop during procedures like placement of dental implants, excessive denture pressure, etc.

In truth, a good dentist will always palpate on the gums before and after the treatment to ensure there is no abnormal prominence of the roots that can be felt. Additionally, before any dental treatment that includes the movement of bone, it is essential to take a radiographic confirmation to see the position of the roots.

Treatment of dehiscence and fenestration is done with the primary goal of covering the exposed root surface. This is done only after ensuring that the area of concern is completely free from pathogens. Once this is done, depending on the health of the gum tissue, the defect can be corrected through grafting or restoration. The treatment might also include stretching of the gum tissue over the defected region and later suturing it by making sure that no region of tension develops following the treatment. Bony regeneration techniques are also done in severe cases.