What is the difference between osteoinduction and osteoconduction? 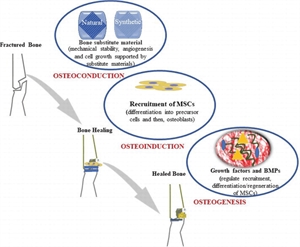 One of the most unique tissues of the human body is the bone. The reason for its uniqueness is its ability to completely regenerate and repair itself. Be it healing of a fracture, grafting of a bone, implant placement, the bone is a busy tissue, whose cells are always active in the healing, repair and formation of a new bone.

The growth of a bone occurs through three mechanisms – osteoinduction, osteoconduction and osteogenesis. So what do these terms mean? Osteogenesis means the genesis or formation of a new bone. An inductive and a conductive process play an important role in osteogenesis. Let us have a look at them individually.


The bone-forming cells are called osteoblasts. Even though they are bone-forming cells, an injury to the bony tissue might not be completely healed by these osteoblasts alone. They need a helping hand. This helping hand is provided by cells from the tissues surrounding the site of bone injury. These sites contain cells known as undifferentiated cells. These are cells that have the ability to convert into pre-osteoblasts, i.e., a stage before converting to bone forming cells. The conversion of the undifferentiated cells into pre-osteoblasts needs a stimulus. This stimulus that induces the conversion of the undifferentiated cells is initiated by agents that are forms of proteins. Hence, while selecting a bone graft, a material that is placed to restore lost bony tissue, it is important to see that those inductive protein agents are present in the graft material. This entire process, where a stimulus (inductive agent) is utilized to convert a certain type of cells into pre-osteoblasts form bone (osteo) formation is called Osteoinduction. Apart from these inductive agents, osteoinduction can also be enhanced by certain compounds that contribute to the bone growth. These are called promoters and the process is called osteopromotion.


Osteoconduction and osteoinduction are dependent on each other. Osteoconduction involves not only the action of bone-forming cells but also inculcates the role of blood vessels and various amounts of small proteins that act as growth factors during bone formation. The conduction of bone formation through these means occurs as a natural body mechanism. However, in procedures of implants and grafting, it is important for the dental surgeon to select a material that is compatible with the body tissues such that the process of bone healing and formation does not get hindered. Hence, the selection of a proper biomaterial will facilitate the osteoblasts to form the new bone over the graft or around the implant. Thus, the graft material or implant should act as a bridge that links the existing bone and the new bone. The result of osteoconduction is a bony surface consisting of various channels, pores and a matrix that acts as the scaffold for the new bone.

What is the difference between autograft, allograft, alloplast and xenograft?


Bone grafts are of four types: Autograft, Allograft, Alloplast, Xenograft. Autografts are those materials that are obtained from the same individual. These are harvested from the patient’s own bones. Allografts are those materials that are harvested from another individual of the same species. Xenografts are derived from another species and alloplasts are synthetic in nature. All four of these are at least osteoconductive in nature. However, only autografts are capable of all three – osteoconduction, osteoinduction and osteogenesis. Allografts may or may not be osteoinductive.

Bone formation ends when the scaffold formed by osteoconduction gets completely resorbed and a new bone has formed. This happens as a part of the process called osteogenesis which literally means genesis or formation of the bone. Osteogenesis mainly occurs as a result of the action of the osteoblasts. These osteoblasts play a vital role in remodelling and reshaping the bone. The process of remodelling the bone also utilizes bone-destroying cells called osteoblasts. The result of the bone remodelling is evident four to five weeks later when the matrix of the bone is completely laid down. This is called the osteoid. However, it is important to note that osteogenesis can only occur if the bone graft material used is autologous in nature as mentioned above.

Unlike any other surgical procedures, the bone grafting techniques too have their own risks to tackle. Any fault in the selection of bone material or any injury to a nerve or artery during grafting can directly affect the osteoconduction and osteoinduction processes that can ultimately lead to fracture and hematoma formations. Hence, it is of prime importance to understand the nature of the pathology and physiology of the bone.