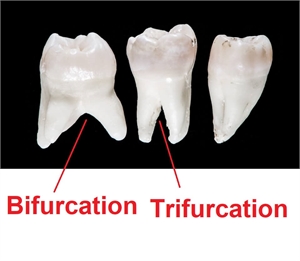 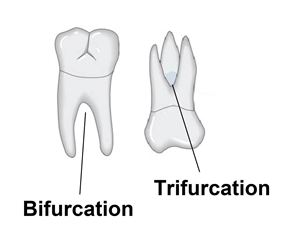 The human teeth can be visualised as the ones located in the front (anterior) and the ones at the back (posterior). The anterior teeth have an esthetic value since they are directly visible upon smiling and normal speech. The posterior teeth essentially help in chewing and breaking down of food and maintaining the height of the face by ensuring a comfortable bite pattern.

A tooth has two parts: the crown and the root. The crown is the white part that we can see in the mouth. The root or roots are covered by the gums (gingiva). Hence, we cannot see them directly. The anterior teeth are most often single-rooted whereas the posterior teeth are multi-rooted. The number of roots in posterior teeth can be 2 or 3. The more number of roots indicates that the tooth has better potential for resisting forces from all directions. It also indicates that the tooth has a rich blood supply. The part of the tooth from where the multiple roots sprout off is called a furcation. If two roots arise from one common point, it is called a bifurcation. If the number of roots are three, then the common junction is called a trifurcation. The upper premolars and the upper and lower molars have two or three teeth and thus have furcations.

Furcations lie in close proximity to the underlying bone. When a tooth is decayed, the infection travels from the crown towards the roots. After the crown is infected, the furcation gets involved. When oral hygiene maintenance is poor, then plaque and calculus can weaken the supportive tissues of the tooth. In such a case, the gingiva recedes, thereby exposing the furcation of the tooth. Traumatic incidents may also lead to fracture of the root extending till the furcation area.

The blackish area on the radiograph also indicates the amount of bone loss that is likely to have occurred. When the furcation defect is minimal, the bone loss may not be evident on the radiograph. This is because this defect involves primarily the gums and other soft tissues and can be resolved by deep scaling (cleaning) of the teeth. A further involvement of the infection might result in a probable defect. This means that a pointed instrument like a probe can be passed through the visible furcal area. However, bone loss might not be too significant. The next level of furcal defect is when the furcation can be appreciated clinically and the probe can be passed in the tunnel formed by the furcation area. Bone is no longer attached in the furcal area and the probe can be passed horizontally through the furcation.

A tooth with furcation defect usually has a less favorable prognosis. However, extracting the tooth is only the last treatment modality. Treatment is aimed at two things in particular: re-establishing the normal anatomy of the tooth and its surrounding structures, and protection the tooth from any further microbial invasion. The preliminary steps involve scaling and root surface debriding which rids the area of existing plaque and calculus. In order to reform the tooth structure, grafting and tissue regenerative procedures can be carried out. These procedures involve instalment of a graft material and a matrix of regenerative potential, that over time rebuilds the lost bony tissues.

Teeth with decay extending towards the furcation area also require a root canal treatment. This involves removal of all the infection from the pulp of the tooth (that houses the blood vessels and nerves) and restoring the tooth with appropriate dental materials. A crown also needs to be placed at the end of the treatment as the tooth structure is already weakened during removal of the infected parts.

Furcation defects need to be addressed immediately in order to halt the lesion from progressing to the underlying bone. If neglected, the bony support of the tooth can be lost to the extent that the tooth is eventually mobile and the only treatment option available is its removal.