What is Tooth Mousse? 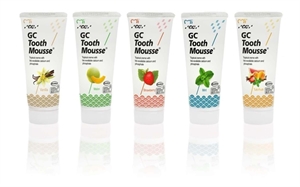 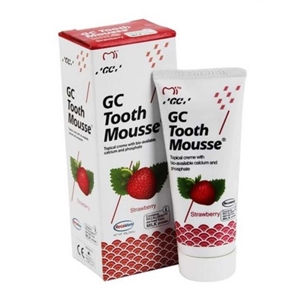 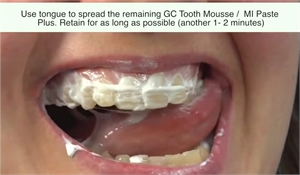 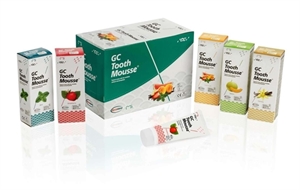 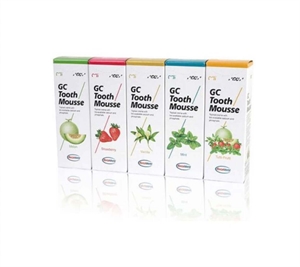 Upon encountering the word "mousse," a reader draws out a picture of a delicious creamy chocolate dish. In the world of hair styling, the word mousse is referred to a cream that is applied on hair strands in order to condition them. But, what is a tooth mousse?

Tooth mousse is a product of GC Corporation that is better known for its creme like consistency. So, why apply creme on teeth?

Tooth mousse is used in individuals in whom non-cavitated carious lesions (NCCL) can be appreciated. NCCL represents that stage of a cavity wherein the enamel is still intact and yet there is a visible white spot lesion on the tooth surface. The approach to such a condition of  demineralization is countered with a minimally invasive remineralization technique. This is where Tooth Mousse makes its appearance.

The active ingredients in tooth mousse are: Casein Phosphopeptide (CPP) and Amorphous Calcium Phosphate (ACP). ACP alone was initially used in remineralizing agents. But the major drawback of this ingredient was that in the oral cavity, ACP's action was unstable, resulting in a quick depletion of the released calcium and phosphate ions. Moreover, this poor phase of CPP-ACP also adds to the build-up of dental calculus.

Casein Phosphopeptide, as the name suggests, contains Casein as its main component. Casein is a milk protein that prevents the dissolution of enamel. CPP is vital in the Tooth Mousse formulation because of its amazing potential to stabilize the ACP in the dental plaque by buffering the calcium and phosphate ions. Each molecule of CPP has the ability to bind 25 calcium ions, 15bphosphate ions and 5 fluoride ions. This keeps the tooth enamel supersaturated and thereby increased remineralization of enamel. The supersaturated state is largely because of the affinity that CPP-ACP has for Streptococcus Mutans. This leads to a slower diffusion of free calcium ions from the tooth surface.

Remineralization of the tooth by application of Tooth Mousse occurs due to two mechanisms:

I) CPP bound ACP buffers the plaque pH by acting as reservoirs of calcium and phosphate ions. The increase in these ions does not allow the plaque pH to drop.

II) Acid produced by the core structure of plaque pH is nullified by the formation of hydroxyapatite that is formed during the remineralization of enamel.

Apart from the above processes, a 2009 study comprehensively proved that even in the presence of external acids that are consumed from food sources (citric acid), CPP bound ACP can promote tooth remineralization.

When the CPP of tooth mousse enters the salivary pellicle, it does not allow the cariogenic streptococci to bind to the tooth surface. Moreover, Casein has been proved to decrease the quantity and reduce the quality of plaque in many studies. Tooth mousse thus reduces the colonization of bacteria and thereby justifies its anticariogenic potential. A 2014 study states that 1% CPP-ACP could reduced smooth surface caries by 55% and fissure caries by 46%. This is as good as applying 500 ppm of fluoride.

What is Tooth Mousse used for?

Tooth mousse can be applied in the following procedures:

How to use the Tooth Mousse product?


Tooth Mousse is available in various flavours like vanilla, strawberry melon, mint and tutti-frutti. 1g of the creme is applied on the teeth with a clean finger and is left undisturbed for 3 minutes. Rinsing is avoided and expectoration should be minimal. Tooth Mousse should be allowed to dissipate on its own. Eating or drinking is avoided for 30 minutes following its application.