Why should I keep my toothbrush away from the toilet? 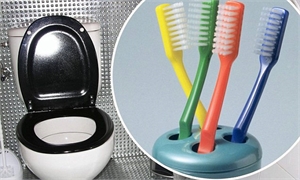 The answer to the question is obvious for most of us. Surely no one would like to keep their toothbrush, an object that you put in your mouth, close to a place where you pass stools. It might sound disgusting and at the same time pose a question, why do we need such a question to be explained?

Back in 1975, a study in the Journal of Applied Microbiology described in length, a phenomena known as "Toilet Plume." Concisely speaking, this phenomena occurs on a daily basis when you turn on the flush of your toilet. The cleansing action of the flush is such that it creates a mini whirlpool in order to get rid of the faecal or urinal matter. But in the process, it releases tiny microbes that gush out of the toilet, due to the forced spiral motion of the flush. These microbes eventually settle on every surface near the vicinity of the toilet, thereby contaminating it.

When it comes to a washroom setup, toilet bowls are the worst in terms of amount of bacteria accumulation. There are 3.2 million bacteria per square inch found on the surface of a toilet bowl. The next worst area for bacteria accumulation in a toilet might be the toilet seat. Surprisingly, that is not the case. The next most contaminated spot in the washroom is your toothbrush head. It is house to 200,000 bacteria per square inch. Besides, microbes on a toothbrush are not simply of one type. Multiple species of bacteria form colonies on the bristle surface which can easily make you sick. Some of these species obtained from toilet seats have the potential to cause diarrhoea and other infections.

So how to help our toothbrush win in this war against the toilet plume?

Firstly, the war can be easily won. It takes only a few precautions that one needs to take in order to eliminate all the hazards of getting sick from toilet plume contamination on the toothbrush. Here are all the necessary precautions:

• Keep the lid of your toilet closed before flushing.


• Keep your toothbrush at least 3 feet away from the toilet seat.


• Toothbrushes need no romance. It is wise to keep to toothbrushes separate from one another.


• Sharing a toothbrush is just another case of cross fecal contamination through bristle heads. Avoid it.


• After brushing your teeth, make sure you dry the bristles thoroughly after rinsing it in lukewarm water. Keeping the bristles moist favours the accumulation of bacteria.


• Capping the toothbrush should be avoided. Your toothbrush needs its breathing space. A ventilated environment can reduce the chances of bacteria accumulation.


• Using a toothpaste majorly eliminates the risk of getting infected with toilet plume bacteria.


• Toothbrushes can be sterilized with special rinses available in the market. Germophobes can go an extra mile in order to get a UV sterilizer in order to make their toothbrushes bacteria-free, but it comes with a handsome price tag.


• Do not make the mistake of keeping your toothbrush in a microwave to make it sterile.

It is important to note that if you are ill for any other reason, it would be wise to replace your toothbrush the moment you get better. As far as healthy people are concerned, after 3 months you should have a new toothbrush for yourself. Prolonging the use of old toothbrush cannot only be harmful to your oral cavity, but it also serves as an easier medium for toilet plume microbes to reside upon.

The above mentioned methods are sufficient to help you in getting your toothbrush or subsequent your oral cavity contaminated.