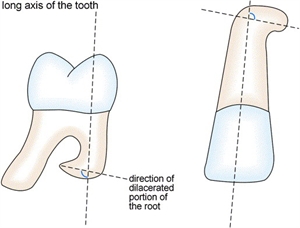 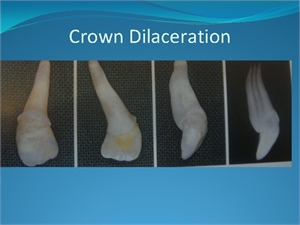 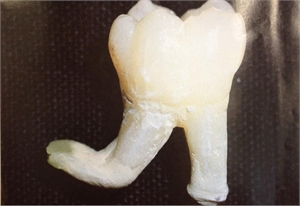 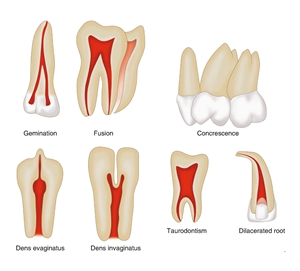 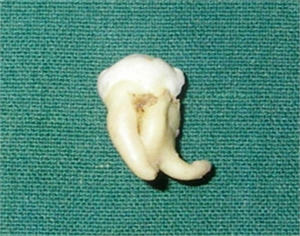 Dilaceration can be a result of a traumatic injury or a disturbance in the developmental process. Understanding these two mechanisms can help us in getting a clearer idea of the condition. Dilaceration is more commonly seen in permanent teeth compared to deciduous teeth. The most commonly affected teeth are the upper front teeth.

The above-mentioned mechanism is not the only means by which dilaceration occurs. Developmental disorders affecting the tooth bud, presence of cysts or tumours, traumatic extraction of primary teeth are some other reasons that can cause a shift in the direction of the developing tooth bud. There are certain syndromes like Smith-Magenis, Ehlers-Danlos, Axenfeld-Reiger and congenital icthyosis, along with whom, dilaceration has often been associated.

Dilaceration can occur at any area of the tooth's root. It can affect any teeth depending on the direction of trauma. As a result, the crown of the tooth may stay unerupted or might erupt abnormally in a different direction. The dilacerated tooth might cause an inflammatory bulge in the soft tissues which may or may not be painful.

Apart from palpation of the areas surrounding the dilacerated tooth and observing the position of the affected tooth, dilaceration can be suspected. However, it is only after a radiographic investigation of the roots that its presence is confirmed.

Cone Beam Computed Tomography (CBCT) has become a more reliable radiographic investigation to confirm the presence of dilaceration. Since it gives a three-dimensional view of the tooth, diagnosis is much more accurate. Moreover, it has added benefits of less radiation exposure, better contrast and high resolution of the tooth of concern.

Management of a dilacerated tooth depends on the severity of the dilaceration, its position, amount of root formed and amount of space around the impacted tooth. Depending on these factors, it is decided whether to reposition the tooth or remove it altogether.

Orthodontic traction is one method where tooth with a favorable prognosis can be repositioned in the arch. However, this is a time consuming approach and warrants much patience. Moreover, it is a multidisciplinary approach, meaning, that dentists of multiple specialities (orthodontics, pedodontics, oral surgeons and periodontics) need to work together to maintain the health of the surrounding structures as well.