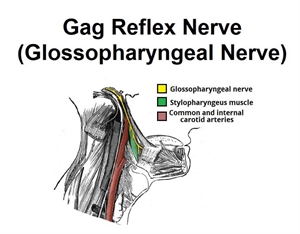 Gagging is a defensive response by our body. It is a form of coughing which avoids the entry of unwanted or foreign objects inside the throat. It helps in preventing choking when a stimulus is applied in the back of the mouth at the uvula, tonsils, soft palate or the roof of the mouth. In new born babies, gag reflex is at its peak in the first six to seven months. This is why any solid food not fit for the infant is eliminated during this stage. It is only after this time period that the gag reflex begins to diminish.

A gag can be described as a reflex action. The nerve that "senses" the stimuli is called a sensory nerve. In gagging the sensory nerve is the glossopharyngeal nerve. By the name, we understand that this nerve is responsible for nervous supply in the tongue and the pharynx. If the gag is initiated due to a touch on the palate, then the sensory component is carried out by the trigeminal nerve.

When the glossopharyngeal or trigeminal nerve senses an unwanted stimuli in the back of the mouth, it sends an electrical signal to the brain. When the brain receives the signal, it in turn sends back a signal via the vagus nerve that commands the muscles of the concerned area to initiate the gag. The vagus acts as a motor component in this arc.

The vagus nerve causes the contraction of the muscles of the pharynx. It also elevates the soft palate simultaneously. In doing so, the unwanted foreign object or touch is pushed out. In individuals who are anxious and stressed, a gag reflex might multiply into excessive coughing and vomiting.

In the dental clinic, patients with a sensitive gag reflex nerve often find it difficult to receive the treatment. In children a gag reflex is commonly seen when they have a habit of breathing through the mouth or thrusting their tongue forward between the front teeth.

In cases where a dentist wants to fabricate a prosthesis for missing teeth or for fabrication of crowns and bridges, he or she might take a replica of the patient's upper and lower jaw arch. The dentist does so by placing a tray filled with a flowable material that creates an impression of the teeth in the arch on the tray. During this procedure, the palate and the back of the tongue might trigger the gag reflex, making it increasingly difficult to take an impression.

Another instance when a gag reflex is triggered during a dental treatment is when the suction tip contacts the back of the tongue. The dental surgeon at that intance advises the assistant to place the suction tip as anterior as possible. In more severe cases, the suction tip is completely removed and the patient is asked to spit the excess water or saliva in the mouth.

The gag reflex can be managed by distracting the patient to another stimuli or by helping them relax and calm down before the dental treatment. This should be done as stress and anxiety are some of the major contributors to gag reflex. Before the treatment, the dentist might ask the patient to take sedatives in order to prevent the gag reflex during treatment.

Gagging, retching, hiccups, vomiting are the various defensive mechanisms of the body. While some of these can interfere with routine dental treatments, most of them can be managed by certain pharmacological drugs and desensitizing treatments.