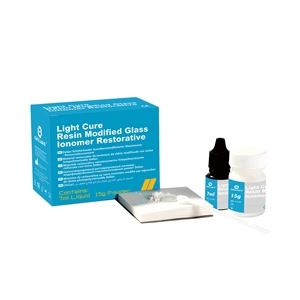 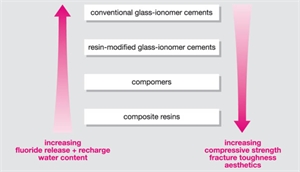 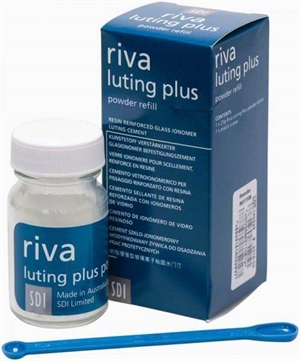 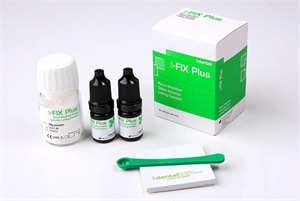 In 1991, dentistry's material science welcomed a new product that was anticipated to be the best restorative filling material. A restorative filling material is that, which is applied to the tooth after all the caries has been removed from the cavity. Two of the leading restorative materials known today are composite and glass ionomer cements (GIC). Not only do these materials resemble the color of the tooth, but also possess great mechanical and chemical strength that add to their longevity.

A normal GIC has a powder and liquid representing an acid and base. A reaction between them results in the formation of salt that hardens after a certain period of time. Composite on the other hand consists of long-chain polymers and resins that are activated when a light of certain wavelength penetrates it. This leads to hardening of the composite. RMGIC sets by utizing both the acid-base and the light-activated reaction. This gives it a superior strength compared to normal GIC.

GIC has a unique property of releasing fluoride ions after being placed in the tooth. Fluroide does not allow the microbes to thrive by changing the acidic level on the tooth surface. It also has an additional effect on the tooth's surface energy, which does not allow the microbes to bond to the tooth. This property of GIC is also seen in resin-modified glass ionomer cements. However, it is still debated if at all the release of fluoride ions of RMGIC is superior to conventional GIC or not.

RMGIC's biggest disadvantage is that it derives a monomer from composite called HEMA (2-hydroxyl methacrylate). Once the resin-modified glass ionomer cement is placed in the tooth, HEMA is gradually released over the next 24 hours. This monomer is considered to be toxic to the pulp of the teeth and poses severe health hazards for the dentist if inhaled.

Another shortcoming of RMGIC is its inability to prevent caries. It sure has a superior strength mechanically, but chemically microbes might still be able to penetrate it since its fluoride release is not sufficient enough.

Recently, researchers have tried to modified resin-modified glass ionomer cement itself by incorporating certain nano-particles that can improve its properties overall. However, more studies are needed to accept this modified version of the hybrid material.

RMGIC has similar uses as that of conventional GICs. These include the following:

• Sealing pits and fissures on chewing surfaces of teeth


• Applying resin-modified glass ionomer cement as a bridge between a crown and a tooth for better adaptation.


• The added strength of RMGIC allows it to be used in larger carious lesions unlike conventional GICs.


• Resin-modified glass ionomer cements can also be used to build up the tooth that has suffered a fracture.


• It can be used in Atraumatic Restorative Treatments (ART). This includes removing caries with a hand-held instrument instead of a dental drill and later restoring the tooth with RMGIC or GIC.


• It can also be used as a restorative material in milk teeth.

Resin-modified glass ionomer cement is available in three forms. It either has separate powder and liquid bottles from which the needed portions are taken and mixed. It is available in the form of a syringe, where the RMGIC is already available in its main form. Finally, it can come in a paste system, which has two outlets that dispense the RMGIC.

RMGIC is aesthetically and mechanically a better alternative to conventional GIC. Yet, its bioactivity is controversial that compromises its essence as a restorative material. Conventional composites fare better than RMGICs and modern times have thus restricted the use of the latter.