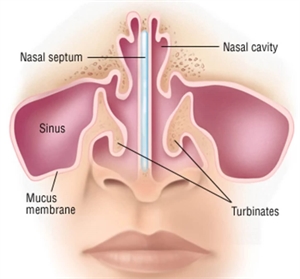 Hemosinus is formed by the combination of two words. "Hemo" meaning blood and "sinus" meaning a pouch or a cavity within the tissues. The sinuses in focus when we are talking about hemosinus are the paranasal sinus.

Paranasal sinus are pairs of sinuses located around the nasal region. There are four types of paranasal sinus: frontal, ethmoidal, sphenoidal and maxillary sinus. These sinuses are filled with air and have more than one function. Apart from helping in the overall growth and development of the face, the paranasal sinus also help in maintaining the intranasal pressure and regulating the volume of the skull. Additionally, the air that we inspire also gets humidified because of these sinuses. Furthermore, the resonance of our voice and absorbing any shock to the facial region are the various roles that paranasal sinus play. Now that we have established the vitality of the paranasal sinus, let us see what happens when these sinuses are filled with blood.

Hemosinus occurs when a traumatic blow to the facial structures causes a breakage in the walls of the sinus. When this happens, the blood vessels surrounding it rupture and the blood oozes out and fills the sinus. The maxillary and the frontal sinuses are the most vulnerable to hemosinus, followed by ethmoidal and sphenoidal sinuses. Hemosinus most often affects individuals in the third and fourth decade of their lives.

When blood gets accumulated in the paranasal sinus, it can lead to a number of problems. Firstly, the presence of a blood-filled sinus can lead to an acute infection. The infection can cause inflammation of the tissues of the sinus, leading to a condition called post-traumatic sinusitis. This form of sinusitis can also occur in hospitalized patients who have been intubated for a long time with nasal and endotracheal tubes. Some other features of hemosinus see the cells of the sinus lose their functionality and the individual might feel an increased pressure within the face. Facial pain and headache is also commonly seen in individuals with hemosinus.

If this condition is allowed to spread and left untreated, it can have severe repercussions. These include:

A hemosinus is often diagnosed by a radiographic scan (CT or MRI) that shows the blood filled sinus as a black dense region. It is often confused with a sinusitis caused by fungal infection. Many times the hemosinus resolves itself in a span of a week. However, intense conditions might need treatments that are entirely based on the symptoms of the patient.

An infection is often suppressed by the prescription of antibiotics. Anti-inflammatory drugs are recommended in these situations. Nadal sprays or decongestants are also advised in order to relieve the intranasal pressure. A fracture at the base of the skull or a fracture in any of the walls of the sinus needs a surgical approach. A surgeon would try to drain off the blood within the sinus thereby simultaneously degrading the swelling or the oedema. The surgeon will also check if any clots or mucous plugs are present within the sinus that need to be removed. During and following the treatment plan, radiographic pictures are often taken in order to check for the status of clearance of the contents of the sinus.

Any blow to the facial region should not be ignored even if there are no external visible injuries. Internally, the breakage of the walls of the paranasal sinuses can lead to hemosinus and its subsequent consequences. Thus, hemosinus should be thoroughly cleared until the opacity seen on the radiograph that represent the condition is no longer seen.