What is lateral excursion? 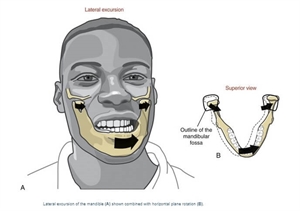 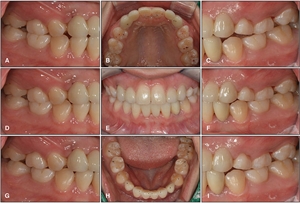 The human skull can be grossly divided into a movable and an immovable part. The movable part is formed by the lower jaw called the mandible. The rest of the skull forms the immovable portion. These two parts of the skull are connected by a joint near the ear. This joint is the temporomandibular joint (TMJ).

The TMJ has three main parts. A temporal part, that is the part of the immovable portion of the skull. The temporal bone is a depression that receives the condyle. The condyle is a part of the mandible that makes the primary movements of the lower jaw. A disc located between the temporal bone and the condyle helps in the range of movements. The smooth movements of the articular disk are possible because of a fluid called the synovial fluid. This fluid acts as a lubricant, as a result of which our lower jaw can move freely during speech, chewing, etc.

Simply put, lateral excursion is when the mandible moves to one side. But the mechanism behind this is not as simple as it sounds. The mandible is capable of two movements if we take the condyle as the hinge: rotation and translation. Imagine a vertical and horizontal axis passing through the condyles. The movement of the mandible with respect to the vertical axis is called rotation and with respect to the horizontal axis it is translation.

The forward movement of the mandible is a translatory motion. The sideways movement is a rotational motion. In lateral excursion, both these motions take place simultaneously. Let us understand this movement with an example. Imagine you want to move your lower jaw to the left side. This means that both the condyles would have to move towards the left. Since the jaw has to be moved to the left, the left condyle will rotate in the desired direction. In our case, the left side is the working side. The mandible is a single bone, if the left condyle moves, the right condyle will be also stretched towards the left. However, since there are many structures that limit this movement of the right condyle, it will simply move forward in translation. Hence, the right side in our example would be the non-working side.

The working and the non-working side function in conjunction to produce the desired movement. However, lateral excursion is not simply a movement attributed to the condyles. A key role is played by the muscles that are attached to the mandible. These are the muscles that find their origin in the immovable part of the skull are terminate their fibres in the moving mandible. The four muscles are lateral pterygoid, medial pterygoid, temporalis and masseter. Each of these muscles help the mandible to glide forwards, downwards and sideways to make the lateral excursion.

Lateral excursion is one of the key functional movements that helps in chewing. It ensures that we humans do not simply chop down the food by simply opening and closing the mouth but also grind it to make a proper bolus for effective digestion. Lateral excursion is the second key step when we chew our food. Once the mouth opens and the food enters the oral cavity, the jaw moves sideways and grinds the food, closes gradually and finally the teeth meet each other before the mouth comes back in a state of rest.

Lateral excursion might be hampered due to problems in the gnathic system. A locked jaw, tumour, traumatic injury, muscle pain, disk injuries, congenital disorders may contribute to improper or no lateral excursion movement. While some of these disturbances need surgical intervention or pharmacological cover, minor disturbances can be corrected with home techniques focusing on physiotherapy.

Prosthetic treatments that involve fabrication of complete dentures give notable emphasis on lateral excursion. During the fabrication of dentures, the upper and lower canines are made to touch each other as the sideway movement occurs. When they glide over each other, the back teeth are no longer in contact which ensures proper lateral excursion. This is also called canine guidance.

Thus, lateral excursion is one of the vital movements that the mandible can perform considering how the entire surrounding musculature comes into picture for normal functioning.