What is the difference between frenotomy, frenectomy and frenuloplasty? 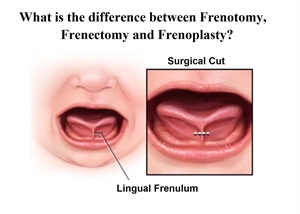 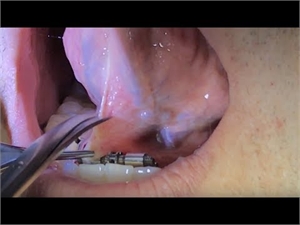 The frenulum plays an important role in restricting the movement of the tongue and lips within the mouth. It is a band of tissue consisting of mucosa and elastic fibres that connects a loose or free moving part to a rigid part of the mouth. Frenotomy, frenectomy and frenuloplasty are procedures that are carried out to correct any anomalies in this attachment.


Let’s first take a look at the types of frenulum in the oral cavity – lingual and labial. The lingual frenulum attaches the tongue from its underside to the floor of the mouth. A tight or short lingual frenulum makes it difficult to stretch the tongue out beyond the lower teeth. If the frenulum is too short, it can cause difficulty in breast feeding in infants as well as unclear speech.


Labial frenulum is the band of tissue that connects the inside of the upper lip to the outer surface of the upper teeth gums (maxillary gingiva). Also known as Superior Labial Frenulum any abnormalities in its length, thickness or attachment point affects the smile of the person. The mandibular labial frenulum runs from the outside of the lower gums to the inside of the lower lip. If the attachment is too close to the gingival margin it can also lead to gum recession.


All three provide necessary stability to the tongue and the lips. However abnormalities in frenular attachments can lead to several dental issues such as plaque accumulation and difficulty in maintaining dental hygiene. This is because an improper labial attachment makes it difficult to place the toothbrush properly while brushing. A very tight labial attachment makes it difficult to smile properly as it restricts the movement of the upper lip. The crevice formed due to a thick frenlum may even cause a muscle pull or even a frenum tear. Further, a diastema or space can form between the upper front two teeth due to overgrowth of the maxillary labial frenulum. This is a cause for concern as it affects the aesthetics of the face. These abnormalities may either be congenital, i.e., by birth or may develop later due to oral surgeries.


Several treatment options exist that can correct these anomalies. These are frenotomy, frenectomy and frenuloplasty. The procedure chosen depends on the extent of the abnormality and the level of problem that it causes to the person. Let’s take a deeper look at the variation in these treatment options.


Difference in Frenotomy, Frenuloplasty and Frenectomy


Frenotomy is a simple procedure in which the tight frenulum is snipped off on an outpatient basis. Limited nerve endings make this almost painless therefore there is no need for stitches or anesthesia. Bleeding is minimal as this area has few blood vessels only. However in older children or adults when the frenulum is too thick a simple frenotomy may not be successful. In such situations the frenulum is incised and relocated at the attachment point. This procedure is known as frenuloplasty wherein an abnormally attached frenulum is corrected by surgically repositioning it. In frenectomy mere relocation does not solve the dental issues involved and the frenum is removed completely, right up to its attachment to the underlying bone.