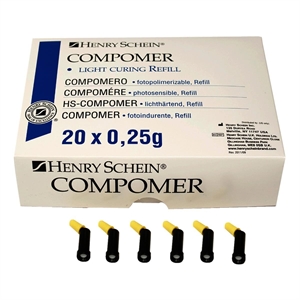 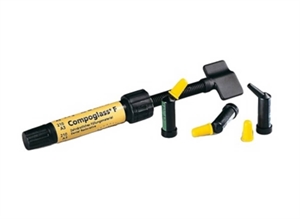 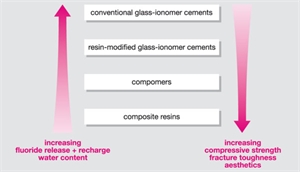 The two most aesthetic dental materials that nearly resemble the color of the tooth are composite resin and glass ionomer cement (GIC). These materials are used to restore the form and function of the tooth following the removal of the carious lesion. However, these materials have their own limitations. In order to improve their drawbacks, researchers took the best elements of both these materials to make a better upgraded material.

The early 1990s saw the development of Resin Modified Glass Ionomer Cement (RMGIC) which we already discussed in our previous section. The late 1990s welcomed Compomers in the dental market. Like RMGIC, Compomers are also a hybrid of composite resins and GIC. The difference is that RMGIC has greater portion of GIC elements in it whereas Compomers have predominantly a composite resin framework. In both these materials, the idea was to make a material that had the strength of composite and the ion-releasing abilities of GIC.

Compomers have a unique framework as they do not contain any type of water within them. They contain structurally large resin particles and viscosity reducing ingredients. Compomers are designed in a way that they absorb water. However, the absorption of water has a direct effect on their strength. When compomers are placed in the oral cavity, an acid-base reaction triggers the release of fluoride ions. These ions prevent the microbes from attaching to the tooth surface and do not allow them to thrive in the acidic environment.

The lack of water also allows the clinician more time to modify compomers at the needed shape and consistency. It is more aesthetic and has better mechanical strength than GIC but is inferior to composite resin in both categories. Compomers can be used in various areas in dentistry. Here is a brief list of the same.

• It can be used to seal pits and fissures on the chewing surface of teeth, which are the first areas to develop carious lesion due to their anatomy (difficult to clean)


• It can be used as a build-up material in minor fractures of the tooth.


• It can be used as a restorative material when a carious lesion is small.


• It can also be used in deciduous teeth.


• It can be used in resealing the margins of previously restored teeth.

Compomers are available in three forms. First is a powder-liquid system where they are mixed for 30 seconds before placing on the tooth. Next is a single component system, where a light is used to harden the material after it is placed in the tooth. Finally, there is an auto-dispense system where compomer is obtained after two special mixing tips dispense the material.

A dentist uses compomers by obtaining it by any of the above three methods. Before it is applied on the tooth, an acid is placed in the affected area that etches that particular area. A bonding agent is then placed in the cavity. This is an important step as compomer cannot bind to the tooth surface all by itself unlike composites and GIC. Once it is placed, the dentist will polish the material to bring back the natural appearance of the tooth. It is important to note that placement of compomer should be done in a completely dry field.

Compomers can last in the tooth unaffected for at least 3 years. Any changes seen after that are mainly due to discoloration of the material or loss of marginal adaptation to the tooth. Overall, compomers are better than GIC in terms of strength and aesthetics. However, they have a poor fluoride-releasing property compared to GIC and inferior in strength compared to conventional composite resins.